A Turtle lands in San Francisco -

I was the recipient of a most wonderful exchange yesterday!!! As many of you know I do enjoy the Quaker stuff - :) ....I was a part of an exchange that took place over at Quaker Inspired - and yesterday I received from my partner Mercy in NY a Super Duper Box O' wonderfulness!!! Lets start off with a snap of the box as I unloaded it - 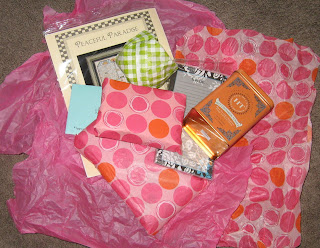 Everything tumbled out from this cornucopia, some wrapped and some not - Mercy included some (From R to L) Delicious spiced tea - (Opening up the canister I got a beautiful whiff of Christmas - just glorious), a "to do" pad of paper that I always can use and the chart for "Peaceful Paradise" - which is a chart that I have wanted for a long time but have never mentioned to anyone that I wanted it - Now how did Mercy know I wanted that one???? 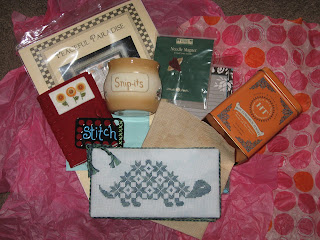 Now - after unwrapping everything - the stitched piece is the Turtle wonderfully finished as a flat fold and done in the prettiest of "Cool Blues." Mercy also included (from R to L) a really pretty piece of linen, a needle magnet, a snip-it jar (that now sits next to my stitching chair.... and I won't have to listen to Rico's bitching about all the bits of floss that seem to be scattered about the house) a really cute needle book and a floss organizer.
I have been truly "Gifted", thank you so very much!!!!! 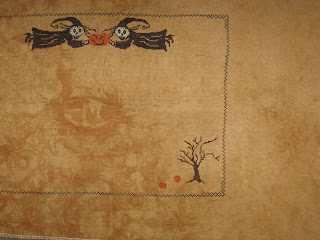 I will work a house into the other corner and I am thinking of putting some sort of saying in the space in the middle - any suggestions..... or thoughts - I pulled out/ frogged some of things I put in as I am sort of winging it in this the lower register.

Last night the movie was "An American in Paris" - 1951 - almost a perfect musical - with Gene Kelley and Leslie Caron - it is a really beautiful movie to watch with great music and superior dancing!!

I did have a question from Joanie about the BPC Sampler and the linen that I am using. I got the piece over a year ago with a win off of eBay. It is some hand dyed job in 32 ct - I really don't have any other info. The auction I was going after a chart and the linen and a ton of DMC came along with the win. I held on to it as it was such a great piece until I had something special to stitch onto it like the BPC.

Thanks for stopping by and all the really nice comments!!!!!!