A Little Stitchin' and llittle Jammin' and some Roses......

Gentle Friends...  a little stitching on Beatitudes... here's a snap... 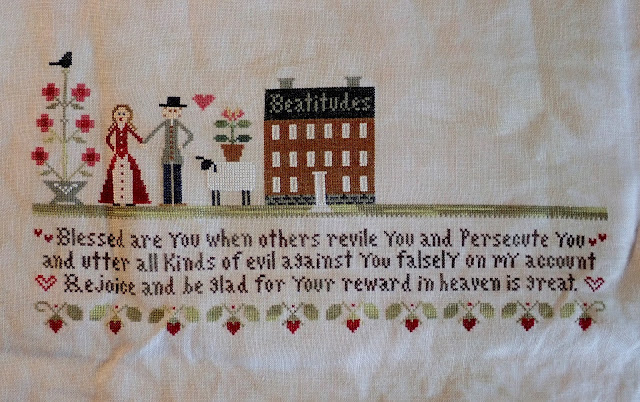 I got the plums on the stove and it filled my biggest pot to almost overflowing... 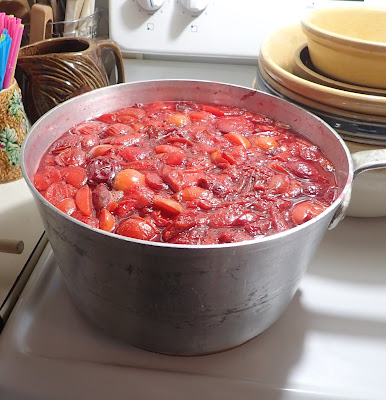 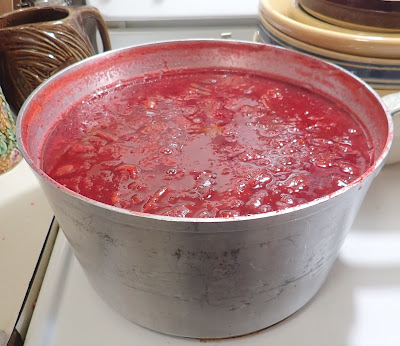 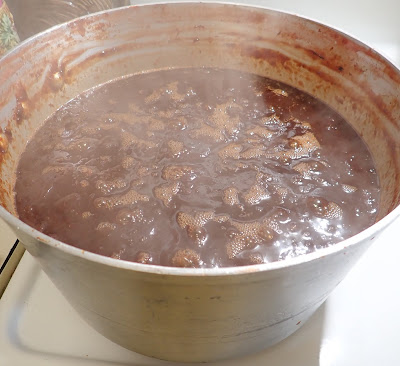 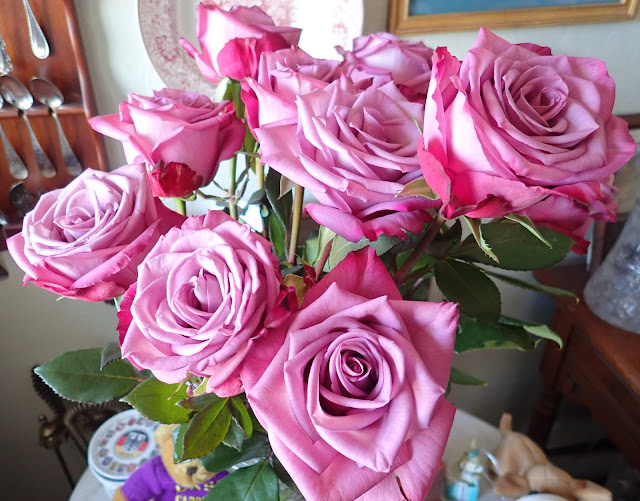 You might remember that we usually get new flowers for the house each week and this week landed on some really interesting roses...I usually go for the yellow-orange variety but this just jumped out and was such a different shade of violet!!  They are really very fragrant also for store-bought flowers.
_________________

There you go sports fans.  Thanks for stopping by do stop again. Stay Safe!

A Little Jam a Little Finish and Some Virtual Cocktails.....

Gentle Friends...it's now the lazy fog enveloped days of Summer here by the Bay and once again I'm rattling the pots and pans to make some jam.  Last Sunday a good friend our ours brought us a few pounds of wonderful Satsuma plums... I asked him how much his tree was producing and he said that about every other year there's a bumper crop and this the year.... so far he's gotten over 100lbs of plums.  Yesterday we headed over to Berkeley where he lives and he gave me about 16+ lbs to make some jam with...  so... 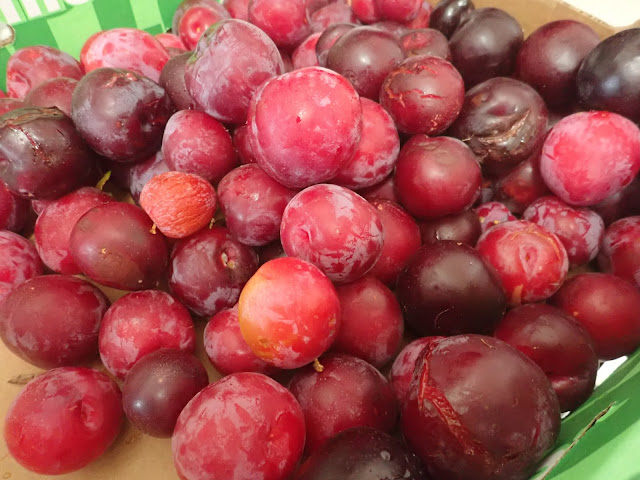 ... with a trunk full of plums we headed back home and last night I got busy and stoned the fruit... 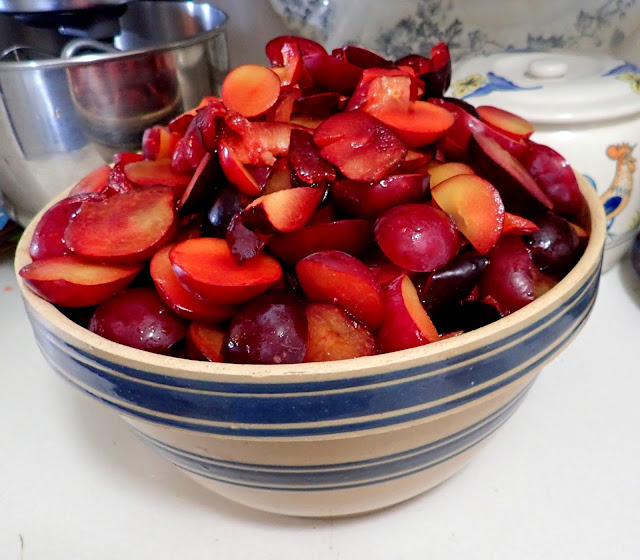 ... I have two of my very largest mixing bowls full of fruit!!  Today I got busy making some jam...  I'm using Natasha's Kitchen recipe for Plum Jam.  It's a super recipe, no peeling, no pectin just some sugar and fruit!!  I made some a few years ago and it was delicious!!  It takes a couple of days but it's so worth the effort.  I post other snaps later.
____________ 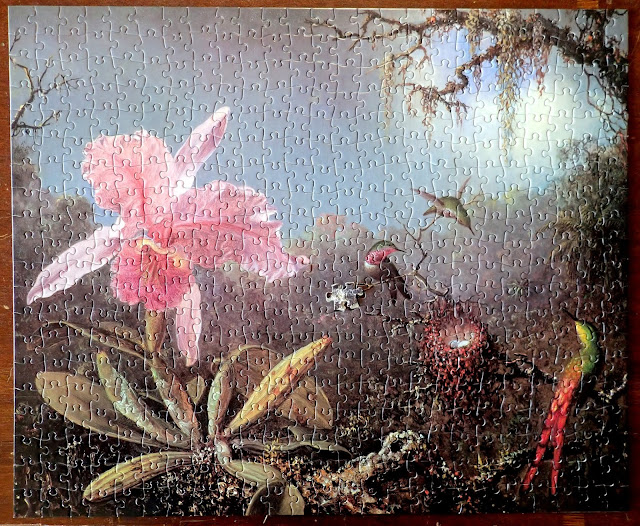 Last night I finally finished up the puzzle I've been working on for the last couple of weeks.  I made sure to only do about 5 or 7 pieces a night to make it last but then I just pushed through and found I was missing a piece... I found out that I had some help... if you look sort of dead center you can see that a piece of the puzzle was "taste" tested by one of the Who Hounds... I think it was Smokie,   but here's a snap, and that sucker is still wet!!  It was a fun puzzle to put together.  I think I need to have bigger puzzles with more pieces so that they last longer....???
______________

My work is having a virtual Zoom Cocktail party tomorrow afternoon and I've hauled out some Bourbon's to decide which to make into some Old Fashioned's or a new to me drink "Revolvers"... which are made with bourbon, Kahlua, and a dash of orange bitters and an orange twist... sounds delish!! 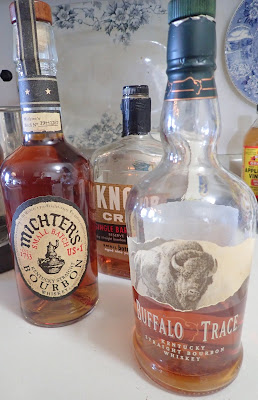 That's about it for today sports fans.  I'll post a snaperoo of The Beatitudes over the weekend.
Stay Safe!

Gentle Friends, once again as the seasons change, for me to post a bit of Vivaldi...  it's the first day of Summer so here's a fun version that "explains" a bit about the music and what's going on...

A Few Roses and a Little Stitchin'

Gentle Friends,  as you might remember we buy flowers weekly for the house... since most of the florists and smaller flower stands have been shuttered up for a few months we'd had to depend on the flower from Safeway (our grocery store)  Now, usually they will last a few days but recently we had some last for almost two solid weeks... and these tea roses have been blown and lovely for all of this week, I did find a petal on the floor this morning when I was taking the snap, but I recut the stem, removed most of the leaves and I think we can get a couple more days out of them..... 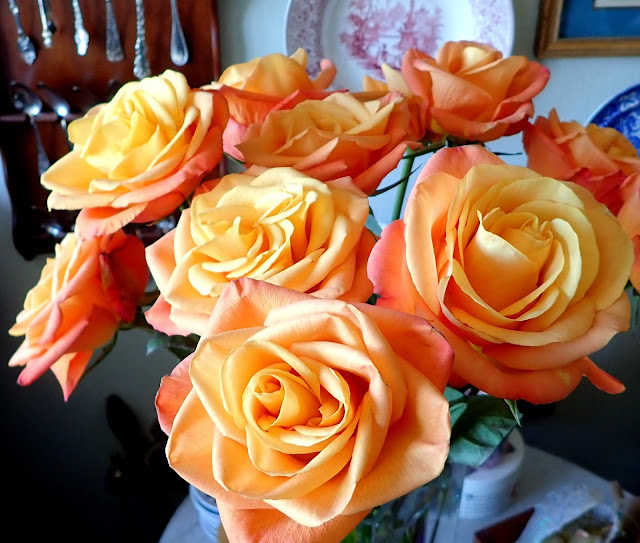 I'ver been stitching away, not as quickly as usual but I did get all the grass-finished up and started on the couple... I'm going to change up some of the colors as this is a really brown/green sampler and a few hits of color won't hurt... 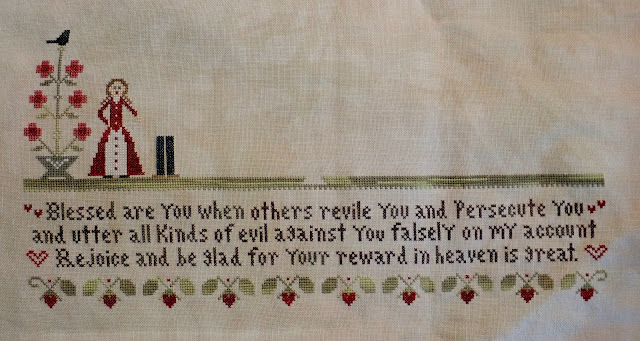 ... I've already changed out the floss for the pants and her eyes from the Hickory Sticks called for to Blacksmith Blue and a pale blue DMC that was sitting in my stitching basket... more changes to come!!  Whoops, I almost forgot I also changed the Hickory Sticks for the bird to a WDW Kohl so it's now a blackbird...  Hickory Sticks by CC is the default colour for so much of this piece.....
____________

Have a super weekend.  Stay Safe!

Gentle Friends, I made a start on my next project...

... Little House Needleworks - "Beatitudes" - I'm using 40ct linen, PTP Legacy and the called for flosses.  I finished up the small bottom section and now it's on to the top portion.  This should stitch up pretty fast and then off to the framers and ready for gifting at Christmas!!
__________________

Gentle Friends... today would have been my mother's 94th birthday, she was born in 1926 in Greenville North Carolina, and born at home.   Here's one of my favorite snaps from her childhood... 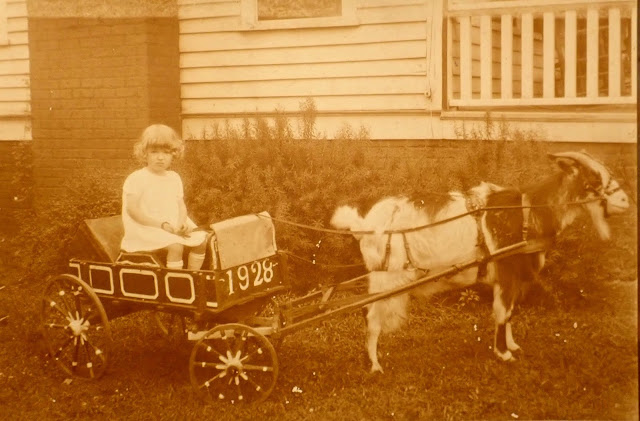 ... she was two and this was taken on the side yard of her home in Greenville...  and who hooks a goat up for a picture???  When I was rooting around for that snap I found this one... 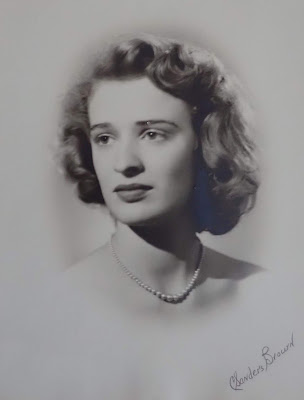 There you go sports fans,  Thanks again for stopping by do stop again.  Stay Safe!!

Gentle Friends, I finished up Agnes and here's a snaperoo... 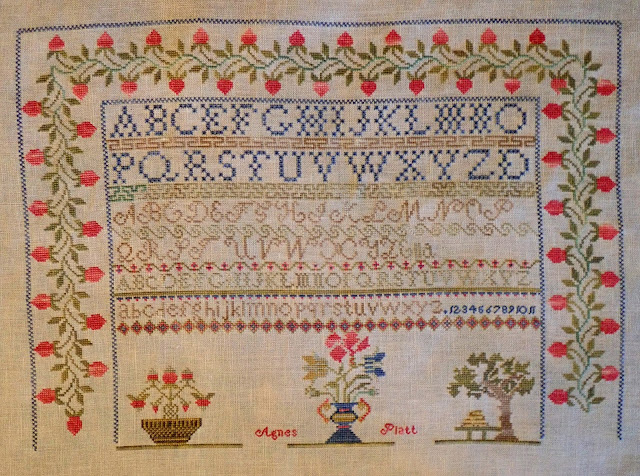 This was a fun little sampler to stitch for the Spring. The changes I made in the floss was to substitute GAST Rhubarb for GAST Holly Berry and GAST Chamomile for GAST Parchment.  I changed the red to soften up the color and the Parchment because it was really too close in color to the linen and just disappeared.

Along the bottom the three motifs I made other changes... the first motif was full of Queen Stitches and I stitched it as charted but after I had finished it just looked clumpy and I was not very happy.   So I re-stitched it with only cross stitches and modified the image a bit.

The second motif of vase and flowers I also stitched as charted but once again I wasn't very happy with the result.  After looking at it for an evening I decided to frog the stitching and to rechart.   The vase as charted from the original sampler was uneven and wonky, my recharting evened it all up.  The third motif is as charted.

I also added an extra strawberry to the vine at the end on the left.  I also usually don't stitch the original stitcher's name when I stitch historic samplers, as I make too many changes to the original charted piece... but with this sampler, I like the placement of her name so it worked for me.
________________

There you go sports fans.  Thanks for stopping by do stop again!  Stay Safe! 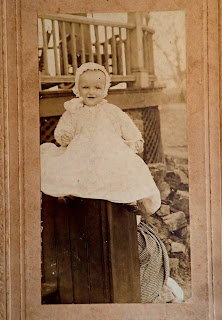 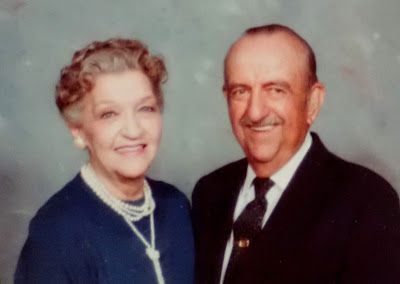 .... this portrait was for their 50th wedding anniversary in 1980...  it was a fun weekend when they celebrated their anniversary, with a renewal of vows and a big party in the church hall.  I know why my grandmother wanted to renew vows in the church because, in 1930, they ran off and eloped instead of a big church wedding.  It's hard to imagine my very conservative and quiet grandparents as two reckless kids running off to get married by the Justice of the Peace!!
____________

There you go sports fans.  Thanks for stopping by do stop again!

A Little Off the Top

Gentle Friends... so... back in April I ordered a clipper set to cut hair.  Knowing we weren't going to be able to get to Anna and get hair cuts I thought it would be a good idea.  Thursday, yesterday,  it finally arrived ... we've both gone since the beginning of March without cuts and I haven't shaved since March 11th and slowly but surely I was turning into a big fuzzy Muppet...but now we have clippers and here's the pile of hair left on the kitchen floor from my head... 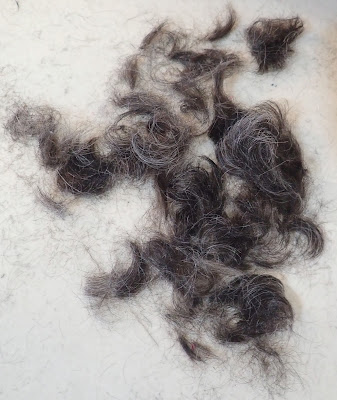 ... the clippers have multiple attachments and one of them allowed me to clip my beard off and now it's just some stubble and the clipped curls have gone down the drain.  I probably should have done before and after but didn't think of that till just now...

I'll have Agnes finished up by Monday and then I'll go over all the changes I'll be making on the three motifs along the bottom.  I wasn't really happy with the stitching as charted so I've begun the frogging and now I'm thinking of the re-stitch.  I stitch for my pleasure so I gotta make me happy first in my book.  Have a super weekend.  Stay Safe!! 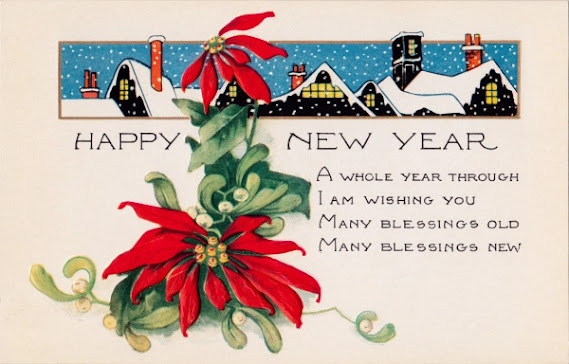