Some stitching and a couple of movies - 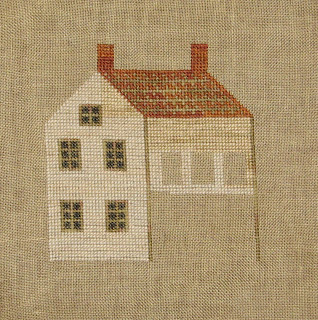 Just plugging away at all the white space - not very interesting, but necessary.

I watched three movies last night beginning with "Sordid Lives" - 2000 - A very funny movie that takes place in Texas and deals with a family and their many problems - being made into "Sordid Lives: the Series"- 2008 and starts next week on LOGO. This was followed up by "Hotaru no Haka" - 1988 ("Grave of the Fireflies") - now let me first state that I am not a fan of Japanese anima, but even within this genre there are some really superior productions - "Howls Moving Castle" - ("Hauru no Ugoku shiro") - 2004 and the gigantic winner "Spirited Away" - ("Sen to Chihiro no Kamikakushi") - 2001 -.... last night watching "GotF" - I found another top notch film - basically it is about two children dealing with the final days of WWII and the devastation that was Kobe and their lives.
If you are not moved by this film it would be a miracle.
The last film of the evening was "Pork Chop Hill" - 1959 - a Korean war film that shows the ineptitude of the war machine - so is it a "War Movie" or "Anti-War Movie" that is for the viewer to decide.

Thanks for stopping by, have a great weekend!!!