An exchange arrives, some super stash - and some movies

Lets start off with the super exchange that I received from Simone yesterday.
The exchange was the LHN exchange from the HOE - Here is a snap - 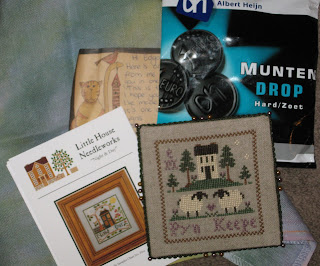 and here is a close up of the Pyn Keepe - 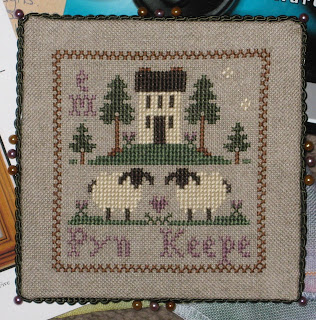 It is beautifully stitched and finished - the back even has a pocket to hold scissors.
I just love that she has used my antiquated spelling for Pyn Keepe - :)
Also included in the package was a beautiful piece of linen from Sugar Maple Fabrics called "Winter Meadow" and a cute LHN chart! Simone reads my blog and found that one of my favorite things is Black Licorice and the Dutch do this VERY well!! She included a big bag of the stuff!!! It is really very different from the American Black Licorice in that there is a distinct salty undertone to the candy and it is harder than expected. I really love this stuff and used to be able to get it here in the city but no longer as the store closed a while back.

The mail also brought a stash order from Drema including a chart I have been craving for a long time and some beautiful silk and cotton over dyed floss'. Here is a snap - 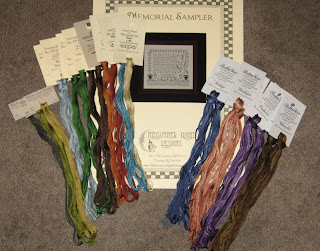 The silks where some new colours from Belle Soie and with my addiction to the stuff - I had to - needed to - couldn't live without - buying them!!! There ya go some rationalization!! I also needed some other colours for some upcoming things so I got some GA, CC and WDW. The chart I have been lusting after for so long is this gorgeous thing from Midsummer Night Designs - called "Memorial Sampler." I just love the verse and the thought behind this and have wanted to stitch it ever since I first saw it.

The two movies last night were as different as could be - starting off with "All the Kings Men" - 1999 a BBC production and aired on Masterpiece Theatre. As always they did a wonderful job with a less than wonderful subject - WWI and the Gallipoli campaign. The cast was absolutely top notch headed by Maggie Smith as Queen Alexandra (just love her!!) and David Janson as Captain Frank Beck. A very good movie and absolutely worth seeing!!!! The second movie was on TCM and part of the Big Bands in Movies this month - called "Two Girls and a Sailor" - 1944 with June Allsyon, Gloria DeHaven and Van Johnson. What a great movie with a ton of music and such wonderful talents very early in all their careers. With specialty numbers by Virginia O'Brien, Lena Horne and Gracie Allen. The side kick in the story was Jimmy Durante and he was as entertaining as always.