Blooming away and some flicks

Getting those "trees" in the garden done, here is last nights progress - 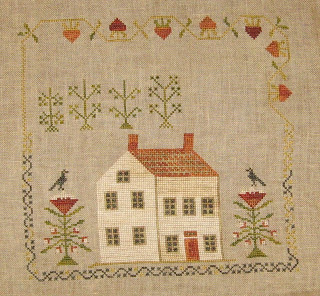 Boy, it is extra crooked this morning - whoops!! - but you get the idea! :) This is stitching up pretty quick and I will probably have it done sometime this weekend - I will need to chart out some initials and shift a couple of the bits around to get them to fit - that shouldn't be a problem. Then I have an exchange to start and my last stitchy Christmas present to whip up - which I won't be able to show as the receiver reads this space and I don't want to spoil the surprise - :)

Last night there where a couple of flicks starting off with "Second Chorus" - 1940 - a pretty dismal film with Paulette Goodard (who was excellent as always!!), Fred Astaire and Burgess Meredith - both who were completely mis-cast !! The reason to see this film is for the band sequences - it was Artie Shaw and his orchestra who were superb. The films last night where part of the Big Bands in Film Series on TCM - the second film was "Du Berry was a Lady" - 1943 - not the best movie - but gorgeous in beautiful Technicolor - a Cole Porter Broadway musical reworked and cleaned up for film audiences then tailored for Lucille Ball, Red Skelton and Gene Kelly. The evening ended with the premier of "Sordid Lives - the Series" - parts where as funny as the movie but you can tell it is new so was bumpy in spots .....but the potential is there and if given time may come together.
Being a prequel to the movie they have lots of really great places to go.

Last but not least - I am overwhelmed by the out-pouring of awards and congratulations to this, my little blog!!! Thank you all so much!!! It really means a great deal to me!!!!!!!