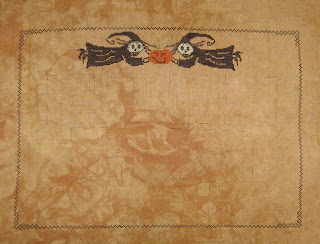 I am really happy with the way they look!! I have also blocked out the squares for everyone - they are about 50x50 so not too big. I need to do some stuff along the bottom of the piece - House, fence, trees more pumpkins....

I also worked on a couple of exchange pieces and a giftie - but can't show any of that.

I saw some really good movies this weekend starting off with "In Which We Serve" - 1942 - a really great WWII movie of flashbacks. If you get the chance this is a really good movie. Then there was "The Battle of the Bulge"-1965 an interesting and long movie at 2 hours and 50 mins. It seems to me there were too many story lines and it was kind of choppy - Then there was "Destination Tokyo" - 1943 with Cary Grant and John Garfield. A very good submarine movie - but some pretty hokey looking special effects!! Then there was "The Music Man" -1962 with Robert Preston and Shirley Jones - I love this musical and could watch it dozens of times - and I have!! Then last night on TCM was Robert Donat night. They showed two great movies - "Goodbye Mr. Chips" - 1939 for which he won the Oscar. This was followed by "The Count of Monte Cristo" - 1934. What a really great movie!! I had never seen this version and really enjoyed it!!

I hope everyone had a great weekend!! Thanks for stopping by!!