A bunch of stuff to yap about - 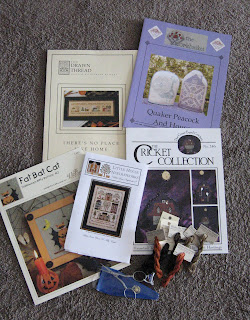 I found a great pair of Dovo scissors ( Like I needed another pair) and I replenished the dark Halloween threads I am running through - I also found a Workbasket Pattern for a Peacock and house I hadn't seen before.

This moves us along to the Halloween RR - I had to frog out some of the verse... as I didn't like the floss I was using - now I am very happy with the CC Timber floss and think it turned out pretty good - Here is a snap as it stands now. 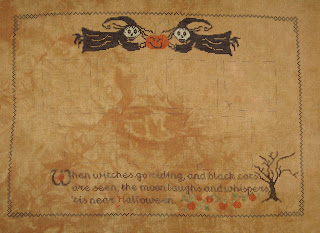 Saturday evening we went to the east bay to the Concord Pavilion ( now called the Sleeptime Pavilion - yea for corporate sponsoring) to see Kathy Griffin. 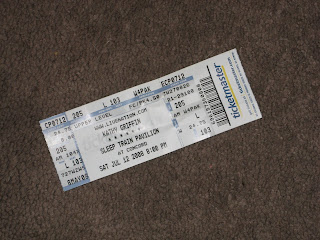 We went with some good friends and had the best time - she was totally out of control!!! We had seen her in person last year here in the city and she was just as good this time!! I am absolutely addicted to her show - "My life on the D List" -

I spent yesterday finishing up ALL of my exchange stitching - now I need to get at that finishing!! I also worked on a favorite UFO a little bit and here is a snap of that - 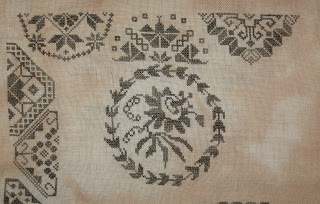 I really enjoy working on this Quaker piece!! I just never seem to get the time to work on my own stuff!! Now what's up with that!

I also finished up the final book in the Jospehine trilogy - 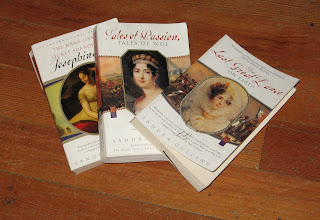 They were a really good read and are written in the form of diary entries by Josephine - If anyone would like to read them leave me a comment and I will send the three books to you - I like passing on books - so - don't be shy..... only one set, so first request gets them....

There was also some pretty good movies this weekend - starting with the "49th Parallel" - 1941 a pretty good propaganda movie with lots of famous faces - Laurence Olivier, Glynnis Johns and Leslie Howard. About a WW2 U-boat landing party that is stranded in northern Canada. To avoid internment, they must make their way to the border and get into the still-neutral USA. Then there was " The Edge of the World" - 1937 - beautifully shot in the northern Hebrides. The story is about the ending of a way of life on a small isolated Island off the coast of Scotland. "Objective, Burma" - 1945 this WWII movie was about parachuters going into occupied Burma and blowing up a radar instillation before the invasion of Allied troops - The cast was headed up by Errol Flynn and a host of character actors - pretty good movie!! Then last night on TCM they showed an all time favorite of mine- "Meet me in St Louis" - 1944 - with Judy Garland, Mary Astor, Marjorie Main and Margaret O'Brien. I love this movie and have seen it dozens of times!!!

That starts off the week!! Thanks for stopping by!!!