A bunch of mail... and a close encounter?

Last night was a total bust in the stitching department. After the supper things were cleaned up and the dishwasher started - I sat down in my chair, the hounds jumped up and settled pretty fast ..... and the next thing I knew it was 10:37 PM - what happened to the evening????? I know it was alien abduction and mind control as it couldn't be just me passing out - and snoozing the evening away????? what's up with that???
Oh well - no snaps of any progress - or pictures of alien probing!!!!!! :)

I did however get some super mail yesterday - so lets start off with a great RAK - from Julianne over at "Julianne's Stitching Corner."
She sent me one of the charts from my wish list.
Here is a snap - 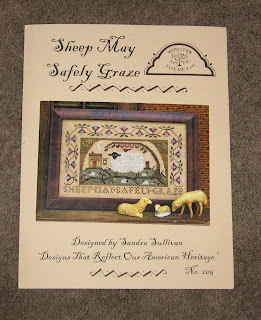 I have always loved this chart - not only because it has a sheep, but the saying is so homey and nice - Thank you so very much!!!! - Now I need to find the time for some ME stitching and get it done!!

I also got an order from Drema at Needlecraft Corner, and an order from 123 Stitch AND a couple of charts I had won on eBay - here is a snap of some of the stuff - not all - as some is destined for others in upcoming exchanges - 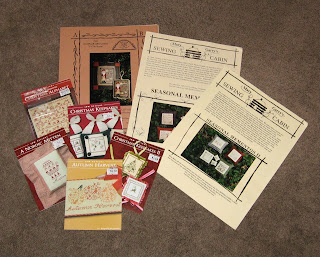 I have been chasing those Mary Garry charts for the longest time (as have others out there) and finally got a couple!! They are scarce as hen's teeth so I was really happy about winning them. Those little charts from JBW Designs are so sweet, and I have a bunch, how could I resist and the little alphabet came with MOP buttons!! The Homespun Sampler ornie from 1999 I did not have and it was on sale -now how could I pass that????

I also mailed out two exchanges - SBEBB - Red work V - travelling overseas so it will get there sometime towards the end of next week..... and HOE Summer Quaker - travelling domestically so it should arrive in the next few days at its new home!!

Yesterday brought a couple of super shots to my ego in that I have been awarded Kreative Blogger Awards by two wonderful ladies - Tammie over at "A Stitch in Time" and Margaret at "Margaret's Blog" - Thank you both for the super vote of confidence in my yapping about all and sundry here at Black Sheep - I often wonder if my babblings aren't just that - but I persevere and still really enjoy everything about the blogging world. I have met so many great people both in person - Michele and Valerie and numerous stitchers over the Internet that it has really been worthwhile - so I ain't going anywhere!!!