Super Exchange mail, working on BPC, a movie and a couple of hounds....

Lets start off with the super Exchange from Chris. The Exchange is from the SBEBB Spring House/Garden Exchange. Here is a snap of the entire package -

and here is a close up of the Pyn Keepe - 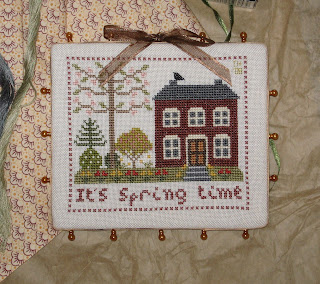 Isn't it just the sweetest thing!!! Chris included a lovely finishing piece of fabric, a nice cut of splotchy stitching linen, 2 skeins of floss AND a box of After Eight mints!!! What a super way to start off the weekend!!! Notice the pins on the Pyn Keepe, they are really interesting as they are a double headed kind I have never seen before. Such a wonderful parcel -
Thank you so much!!!!!

I am going to hold off on any initials until the end and see how I feel about what should go where. This "Moss" silk is really VERY nice and works up a dream!!! On the lower unfinished motif I was off by one stitch so I had to pull the entire thing out up to the little leaf on the top right - if it hadn't been for that I would have been quite a bit further.
Vonna had asked what the linen is and I really do not know. I won it on eBay when I was going after an OOP chart and it was included in the lot. It was a much larger piece as there was some design being worked on it. I cut that off and had the edges surged. The only thing I can say is that it is 32ct, and splotchy, so I would presume it is hand dyed. I have been saving it for a really long time to work something large on it and that is how it came to be the BPC linen.

The movie last night was "Talk of the Town" - 1942 - with Jean Arthur, Ronald Coleman and Cary Grant. A really top notch movie and really worth the watching. Basically a movie about an escaped convict, mob rule, insurance fraud and justice.

We also watched both "Ugly Betty" and "Grey's Anatomy" - they were finally both new and not repeats and quite entertaining. Didn't Vanessa Williams look great last night!!!!

I will leave off the week with a snap of Pete and Hunny. 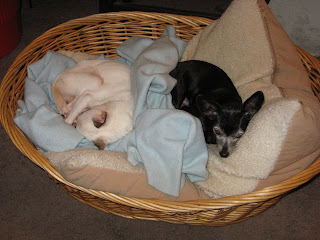 I am not too sure where The Peach was,
but I got the man dog and our "Frosty Faced" little lady!!