After posting yesterday I thought about where that magazine for the chart was. Then got all the nice comments about which mag it came from....so last night I searched around and actually found the magazine I used...it was a Cross Stitch and Country Crafts May/June 1988. Now for me to find that sucker was in itself a miracle, I think I kept it for the cute sheep sampler that is also in it, but who knows, I can be such a pack rat ( very much like my father was) :)

I worked on exchanges last night so I have another older piece to show that I stitched in 1987. Here is a snap of a "Middleton Place."

This is a lovely home north of Charleston, SC on the Ashley River. One of the undergraduate degrees I took was in Historic Preservation and I have always been interested in beautiful old buildings and so I stitched some of the ones I visited.

The movies last night were "Anzio" - 1968 An entertaining film if a bit wanting. Although I think it was trying to be big budget and all that it actually comes off a bit flat. This film is very anti-war and drives the point home on more that one occasion. The music is also very odd for a war film sort of groovy 60's orchestral.... for s way film it just did not fit. The second movie was "Hit the Deck" - 1955 - a light musical remake of "Follow the Fleet" - 1930. Although from the MGM glossy dream machine it is a weak film. Entertaining enough but it is not a "Singing in the Rain" or "Brigadoon."

I did have a question the other day from Monica about where I started Quaker Christmas as she has gotten Quaker Virtues. I started in the middle, I always start in the middle as I don't feel confident enough to start in the corner. It was the way Louann tough me to stitch and I just have never tried another way. BTW - I also have in the stash pile Quaker Virtues and it is calling to me - stitch me -0 - stitch me - stitch me........ but in what on what that is the question???????

I will leave of with our little man - Pete (Peetee). He was watching me take the snaps of Middleton Place but I think he didn't want to get up so he only opened his one eye slightly - 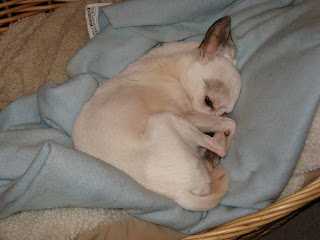 That's his favorite blue blanket and whoa be to thee that touches it!!!