There you go, a title that will drive me crazy...adding an "e" to something just about drives me nuts. That's just me and one of my craziness'!! Exchange week continues and the snap today is of a lovely reconstructed "Palace" from eastern North Carolina, my "olde" stomping grounds. 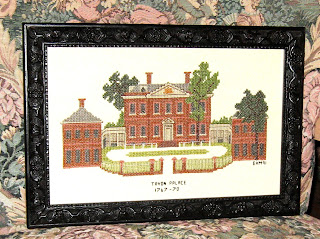 Here we have Tryon Palace, or the reconstruction of Tryon Palace a Colonial Governor's residence. Only the right wing or stable wing survives from the original construction as the main house burned in the 1790's and the left wing was pulled down in the early part of the 19th century. All that aside it is a wonderful site located in New Bern, NC and NB is such a nice place to visit that it is worth the trip. The Gardens behind the house are also lovely and worth the time to explore. They do a super job of interpretation inside and out and the guides are very knowledgeable. New Bern itself is charming and easy to navigate with lots of things to see and do. Becky asked if I had stitched the Biltmore chart I haven't, and I don't know why - as I had one for the home for the longest time. If you are not familiar with Biltmore it is a house from Asheville, NC that is just wonderful and a true American Palace in the French Renaissance taste.

The flicks last night were - "Valley of the Dolls" - 1967 - two things to take away from the movie.....drugs are bad and power corrupts (surprise, surprise!!) At the time this was made it was a pretty shocking movie - 40 years later it is less shocking and more campy. The second flick of the evening was "Van Ryans Express" - 1965 - a movie I had seen a long time ago - it is about a train load of mostly English soldiers trying to escape German held northern Italy in the waning days of WWII. A pretty good action film and never dull, starring Frank Sinatra and Trevor Howard.

We also went shopping last night an picked up Birthday, mothers day, and anniversary cards at the mall ( a place I loath, and try never to go)
In the spirit of the evening we dined at Chez McDonald's, il était délicieux!!! :)

My yesterday evening in a nutshell!! Thanks for stopping by!