On Saturday I got over to Alameda early to drop off a Christmas present for framing at Urban Forest - (I know the holiday is far off - but I like to get things done and out of the way early) It should be ready in a couple of weeks. I then headed over to NIAH with a list in hand - I arrived and grabbed a basket and was loading it up and in walked Valerie. She is just as nice as her blog led me to believe. The last time I was in the "Stack" I had missed her by just three hours. We just shopped and talked and shopped and talked all afternoon. I picked up lots of floss for different projects and quite a few pieces of linen for future exchanges. I also got my copy of the Preview Ornament Issue form JCS. Not only does it have the ornaments but it also has a memorial sampler chart I had read about. It was such a fun day I really enjoyed meeting Valerie and we live so close here in the Bay area it was about time - I am really glad she suggested meeting up!!!!

We also had Rico's Mom and nieces up for the weekend - they brought along the three chihuahua puppies the mama Sugar had. Here are a couple of snaps of a feeding frenzy - 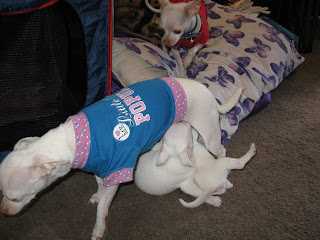 This one has JU-JU Bee in the background. He is an older brother from and earlier litter. 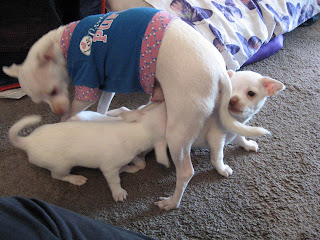 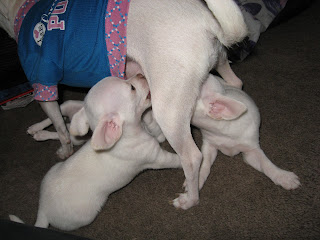 Sugar really had no escape from these hungry little mouths and she is really very patient with them. This will be Sugars last litter as she will be getting fixed after she "gets back to normal."

The only stitching I got done was exchange stitching so no snaps there. There was a couple of movies - "Letter of Introduction" - 1938 - The movie was really very good - but, there were the very long parts with Edgar Bergen performing with McCarthy and Snerd that were odd inclusions - but fine performances by Adolphe Menjou and Andrea Leeds... there was even a small but good part for Eve Arden. The second flick was "Keys to the Kingdom" - 1944 with fine performances by Gregory Peck, Thomas Mitchel, Vincent Price, Rose Stradner and Benson Fong. This is a move worth seeing.

Thanks for stopping by!!!!!