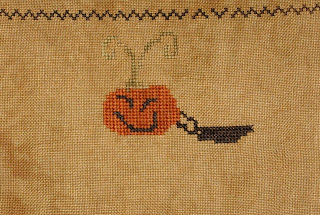 The "Black Coffee" blob to the right is the beginning of an arm. This is centered near the top of the piece as hovering skeletal figures with pumpkin. I had to change the recommended floss' to other colours so that they would show on this linen. The pumpkin was charted as a sort of brown and the stem a kind of yellow grass. The pumpkin is now "sweet potato" and the stem is "sage". The "black coffee" stayed the same. This is going to be such a great RR -

The TCM Images of Asians in Films continued on last night and I saw three of the movies presented. They were - "Bridge to the Sun" - 1961, "China Doll" - 1958 and "Sayonara" - 1957 all three films dealt with East -West personal relations and their problems.
I am finding these films really interesting!