I'm building a house and 3 films 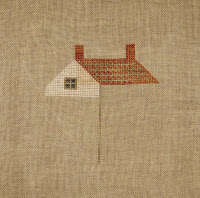 I wonder if it was just my aversion to stitching in whites or the row upon row of white or the two rather odd movies that were playing that made it feel that not too much was accmplished????? You can see the floss and needle behind the linen which is interesting and odd at the same time. I will keep plugging away at this for the next few nights. I also will finish up the QFRR as that needs to get in the mails next week.

The double feature last night started off with "Bam Bam and Celeste" - 2005 starring Margaret Cho and Bruce Daniels. There where some truly funny moments but overall a rather odd movie. The second feature was "Cowboys and Angels" - 2003 a movie set in present day Limerick, Ireland that had more things coincidentally happening to the main characters than is really good for one flick. After those odd films the final flick of the evening was an Anna May Wong film shown on TCM as part of their month long tribute to Asians in Film. The film was "Daughter of Shanghai" - 1937 This film has the great Anna May Wong staring as a Chinese girl who is trying to track down her fathers killers after he is rubbed out for trying to stop the flow of illegal aliens. So the evening ended on a high note!!