Wrapping up the Week with "The Bishops Wife" Film #8

Gentle Friends I wanted to wrap this week of fun Christmas Films with a hum-dinger!!  One of the top Films of the Season.... 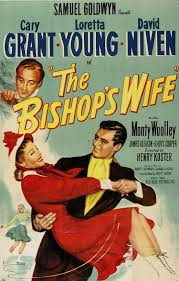 ....."The Bishops Wife" - 1947 - starring David Niven, Cary Grant, Loretta Young, Monty Woolley and Gladys Cooper.  A wonderful film that works on so many levels.  A superb cast in great rolls; snappy writing; superbly paced editing and some super music!  The final cast were not the original choices... The original casting choices were: David Niven was to play the Angel, Dana Andrews the Bishop and  Theresa Wright as the Wife - what a different film that would have made.  The story in a nutshell....."A Bishop trying to build a new grand Cathedral prays fro guidance.  An angel arrives, but his guidance isn't about fundraising."

I watch this film two or three times over the Season and have seen it few dozen times, and it never gets old or boring - that's what makes it a true "Christmas Classic!!"

I found this clip of the Mitchel Boys choir singing "O Sing to God" from the film.  It's a super number ....

A little tid-bit about this film is that yesterdays film "The Man Who Came to Dinner"'s star Monty Woolley is a featured actor in this film, playing a Professor of Ancient History.
______________

Today is the last day to sign up for my Christmas Film Gift-a-Way, you can click HERE to go back to the Post and leave a comment there to Enter. That's about it for today sports fans.  Thanks again for stopping by, do stop again!!