Gentle Friends I a really enjoying this Christmas Film Countdown, reading about the films and looking things up.  I am also learning things I never knew......  today's film, #11...... is.... 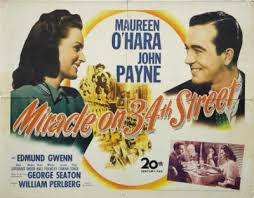 A perennial favorite that is well cast, and well acted with little Natalie Wood as charming as can be as the disbelieving child in the story.  usually I cringe at child actors, but this performance is top notch and believable.  The basic question in the movie.... is the Macy's Santa the REAL Santa Claus?  The film has charm and wit and even an evil "Doctor" of sorts - it has been remade a couple of times in 1974 and again 1994 - but both of those versions pale in comparison to the B&W 1947 version.

Now, for a great little piece of movie trivia....  Thelma Ritter, that great character actress at 20th Century Fox, started her career with a bit part in this film.  She played the part of the weary shopping mother talking to the Floor Walker towards the beginning of the film.  It was from this small part that lead to a wonderful film career with 6 Academy Award nominations (no wins).

I found this expanded trailer created for the film by 20th Century on YouTube......

This fine film is another of my favorite Christmas Must See's -
"Miracle on 34th Street" is a wonderful film worth seeing.

That's about it for today sports fans, thanks for stopping by, do stop again!!  And don't forget to thrown in your name for the Gift-a-Way on yesterday Post.