Gentle Friends thanks so much fro your kind comments and emails, I am way behind, as usual, in answering them....  I guess that's my lot in life, late emailing!!!

The day after Thanksgiving is a shopping day, and although we didn't hit any big stores, we did get to a number of smaller shops here in the City.  The three areas we hit we the Valencia Street corridor, Geary Street and the Haight.  My niece is a big Buffalo Exchange shopper and so we hit both of those and a Crossroads - in addition to a bunch of boutiques, were I found a comfortable chair to sit a watch the goings on in every store!!  We also got to a number of thrift/consignment shops.....  I was able to find a few things, all DVD's....... 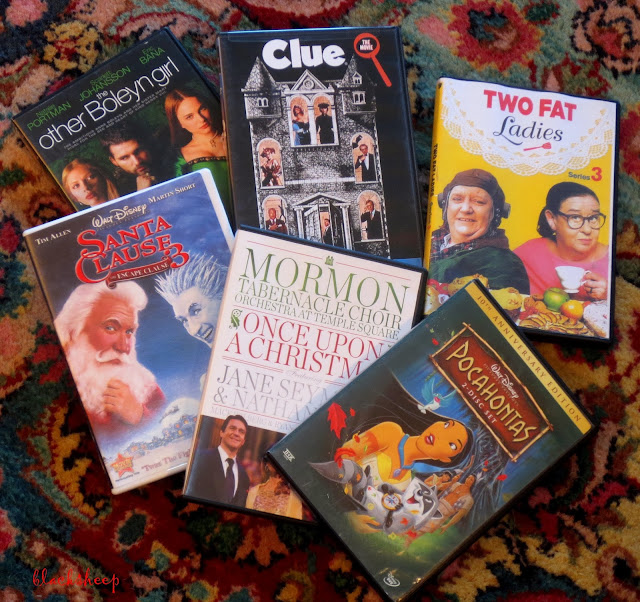 ... "The Other Boleyn Girl" and "Clue" a fun films I didn't have, "Two Fat Ladies" is a great series and I had never knew they were on DVD,  "Santa Clause 3" is the third in the franchise, I really enjoy the Mormon Tabernacle Choir Christmas show is always superior and I love seeing it every year, this is the 2011 Christmas Concert and although I already had Disney's "Pocahontas", I didn't have the 10th Anniversary edition - a pretty good haul I think!!
_____________

"Holiday Affair" - 1949 - starring Robert Mitchum, Janet Leigh and Wendell Corey, this romantic comedy is a modest film based on "The Christmas Gift" a story by John D Weaver.  Although not well received when originally released it has gone on to become a minor Christmas Classic.  The story revolves around the love triangle of Mitchum - Leigh - Corey, Mitchum is a seasonal clerk in a toy department in a large store in NYC, Leigh is a war widow trying to raise a child alone, and Corey her long suffering ever marriage proposing suitor - the story is on the predicable side, but such a charming one it can be seen again and again. There are no elves, and no Santa, but the Christmas magic is there all the same.  I really enjoy this film and if you get a chance give it a look.
_________

That's about it for today sports fans, do stop again!!