Gentle Friends I thought I would save this film for the #1 Spot, since it is truly one of the top 5 Christmas films there is..... 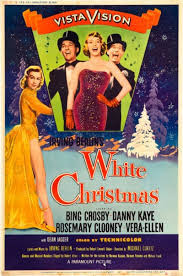 .... "White Christmas" - 1954 - starring Bing Crosby, Danny Kaye, Rosemary Clooney and Vera-Ellen.  A tour de force film with super musical numbers. wonderful sets and some spectacular costumes.  A really wonderful film from 20th century Fox, that spared no expense!!  - and  - was the first film from that studio in the then new "VistaVision.".  In a nutshell the story is about ....."a successful song-and-dance team become romantically involved with a sister act and team up to save the failing Vermont Inn of their former Commanding General."