Gentle Friends today I'll wrap up the week with some real Christmas cheer......  let's start off with an Exchange that I did with Shirlee over at "The Easily Influenced Stitcher" - a while back we emailed about doing an exchange and set the date for St Nicolas Day, today December 6th, as the send date, well as everyone knows both Shirlee and myself are early senders so I got my Exchange yesterday and she'll get hers either today or tomorrow ( I tracked it to see just how close to the Devils Playground it had gotten...).  I got mine home last night and out tumbled a super Christmas Exchange..... here's a snap... 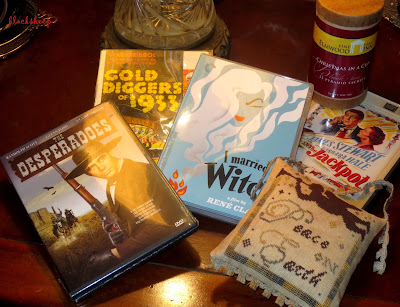 ... Shirlee knows me so well, she included some super DVD's and some delicious Christmas tea... but the focus of the exchange is the ornament, it is simply gorgeous!!! 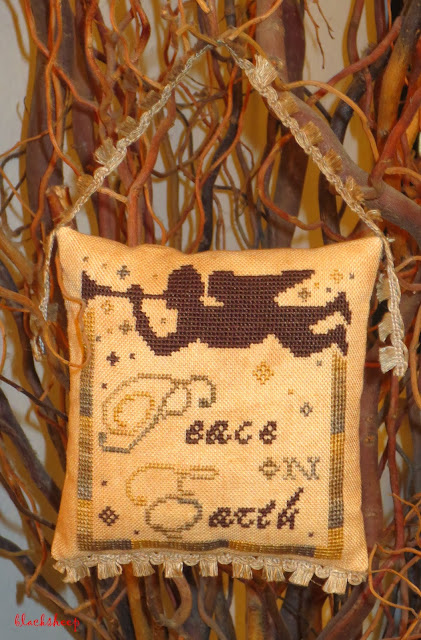 I also took part in the Secret Santa Exchange over on the 123 Stitch Board, and Belinda my partner sent me a chart I had on my wish list AND the floss to stitch it with...... 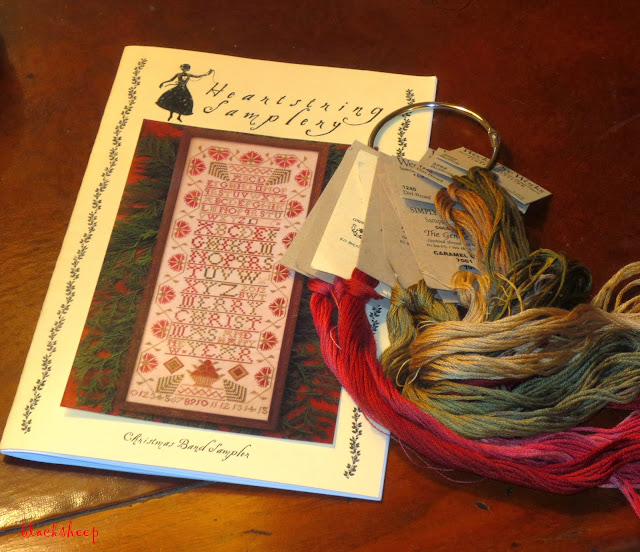 I pulled extra floss from my stash just in case I it is needed.  I love Beth's colouring for this piece, the faded reds, greens and golds are so lovely this band sample will be a wonderful addition to the sampler wall..... here's my teeny tiny start.... 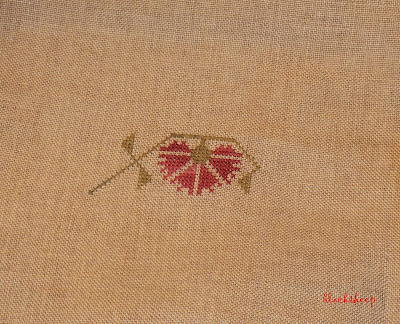 I would have started it two days ago but the linen (36ct Sand) was way to light and cold, I thought, so I tea-stained it and warmed it up a bit, now I really like the linen and the stitching looks great on this shade of brown.
_____________

For the 13th Christmas film I thought I would talk "Dickens" - and do "A Christmas Carol" mention.  There a dozens of versions of ACC out there, lots of film, TV, and radio, even in print, the story is so universal it can change place and time and still the message is the same.  I love this story, always have and always will.  I have in my Film collection numerous versions; some great, some good, some bad and some really bad - but my all time favorite is ....... 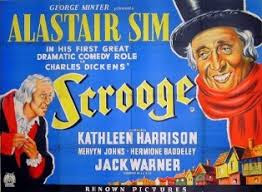 "Scrooge" - 1951 - original title, renamed for the American market "A Christmas Carol" - starring Alastair Sim, Mervyn Johns, Hermione Baddeley and Jack Warner.  The story stays pretty true to the book, but what I think makes this a wonderful version is Sim's interpretation of Scrooge, spot on through the entire film!!  Other versions of ACC I'd like to mention would have to include.... "Scrooged" - 1988 - a modern version with Bill Murray in top form, "Scrooge" - 1970 - with Albert Finney heading up this musical version, it was my Mom's favorite Christmas film and I have always enjoyed it immenselly, "A Christmas Carol" - 2009 - a 3d animated version from the Disney Studio, starring Jim Carrey, "The Muppet Christmas Carol" - 1992 - starring Michael Caine - it's the Muppets and just darling!!, There are other versions..... 1984's ACC starring George C Scott, 1999's ACC starring Patrick Stewart, and 2004's ACC starring Kelsey Grammer.... I could go on and on.... each highlighted ACC should take you to a Wikipedia link to read more about the individual films.  There are many, many versions out there to watch and enjoy, try and catch one this season!!!!

That's about it for today sports fans, thanks for your continuing kindnesses, have a super weekend!!