Gentle Friends for the #2 slot in my film list I wanted to put one of my all time favorite films..... 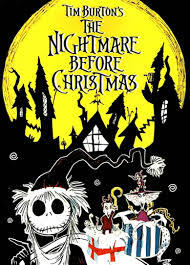 ...."The Nightmare Before Christmas" - 1993 -  starring the voices of Danny Elfman, Chris Sarandn and Catherine O'Hara - the film is more of a cross over film between Hallowe'en and Christmas than solely a Christmas film. Even with the blending of the two Holiday's I still love the imagery and the story line.  The main character is Jack Skellington, the Pumpkin King, who, once he stumbles onto Christmas Town becomes enthralled with the "Christmas" concept.  He tries to wrap his head around the idea of Christmas and at the same time tries to overcome his boredom with his own "Holiday" - Hallowe'en.  He then tries to recreate Christmas from a Hallowe'en point of view.  Not a typical Christmas film by any stretch of the imagination, it's still a wonderful film.

Here's a clip of one of the songs from the film  "What's this?" - where Jack encounters different things in Christmas Town.....