Gentle Friends over the weekend I was out and about to my usual haunts looking for those ever elusive deals and bargains.....  and found a few.... 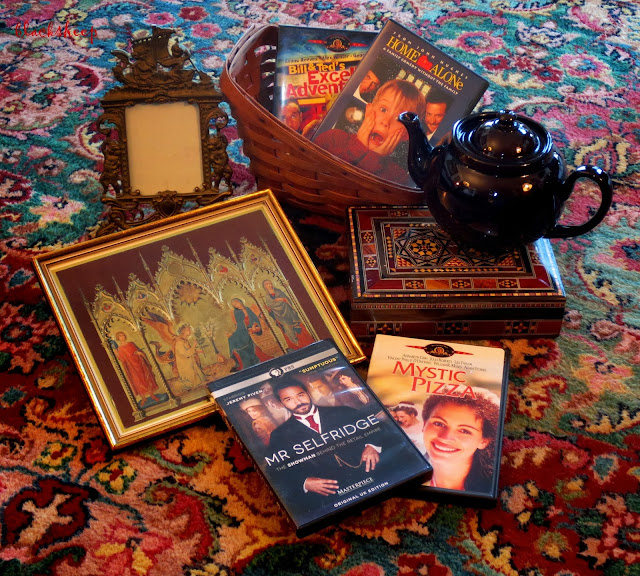 .... I found some great DVD's.......I loaned out my copy of "Home Alone" and it never came back, so this was a good find to replace my lost copy, "Bill and Ted" a funny period film from the late 80's, "Mystic Pizza" a really good, early performance of Julia Roberts, and I was really happy to find what looks to be an unplayed "Mr. Selfridge".  The brass picture frame I think is from the 20's, I found another Longaberger Basket, I do love Brown Betty tea pots, and this replaces the 6 cup one I broke a couple of years ago - the inlaid box I picked up for Rico, he like these boxes quite a bit, and the gilt framed picture is a copy of the Simone Martini "Annunciation with Saint  Margaret and Saint Ansanus" the original is at the Uffizi Gallery - Some fun stuff for sure!
_______________

Film #9 - The film for today is another of my favorite films - and although it takes place at Christmas it is not your typical Christmas film......... 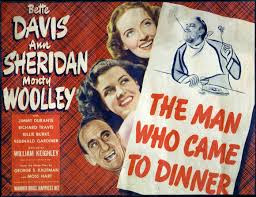 "The Man Who Came to Dinner" - 1942 - starring Monty Woolley, Bette Davis, Ann Sheridan, and Richard Travis - is based on the 1939 play by Moss Hart and George Kauffman.  The story in a nutshell..... "When acerbic critic Sheridan Whiteside slips on the icy front steps of provincial Ohio Businessman, Ernest Stanley, and breaks his hip, he and his entourage take over the house for the Holidays!!"

I love this little bit about the film I lifted from IMBD..... "Monty Wooley Brilliantly delivers the Groucho-like insults penned with supreme wit by the Marxian play and film writer Kauffman, of course, co-wrote many of the Marx's best works and was a good friend of Harpo, upon whom the character "Banjo" is based.  The entire cast is brilliant save for Richard Travis who, while not distractingly bad, is somewhat outclassed by the likes of Bette Davis, Billie Burke, Mary Wickes and Reginald Gardiner."

Another fun tid-bit about the film is that it was Mary Wickes First film performance, she originated the roll of Nurse Preen on the stage and then recreated it for the movie - it is great to see such a super performance for a first timer!!

A fun, smart film, with period jokes and references, but so worth watching again and again!!

That's about it for today sports fans, thanks again for sticking with me and my list!!