Lets see - should I babble about movies or stitching first...... lets do movies....

Yesterday on the eve of the end of 31 Days of Oscar on TCM it was a 2 and 1/2 feature.... Since I don't get home until about 3:45 in the afternoon I often miss the first half of most movies. This held true yesterday when I walked in on the last part of "Fiddler on the Roof" - 1971. Such a nice musical with great songs. This was followed by "A Man for All Seasons" - 1966. The story of Thomas More, who stood up to King Henry VIII when the King rejected the Roman Catholic Church to obtain a divorce and remarriage. Wonderfully acted and a superb movie. Wendy Hiller as Lady Alice Moore was never better!! Then it was "Dr. Zhivago" - 1965 rounding out the evening. This is one of my favorite movies. Not only because David Lean directed it (a favorite director) but it is a monumentally sweeping epic that is gorgeously photographed and backed up by one of the most beautiful pieces of music ever written. As you can see I sort of like it. In fact there is a list of his movies that are super: "Blithe Spirit" - 1945, "Great Expectations" - 1946, "Oliver Twist" - 1948, "Hobson's Choice" - 1954, "Summertime" - 1955, "The Bridge over the River Kwai" - 1957, "Lawrence of Arabia" - 1962, "A Passage to India" -1984. All wonderful movies and well worth watching!!! Enough film stuff -

I also did a bit of the border and it will be a much easier one than "Serenity." This border is only two lines and a broken Greek Key, where "Serenity" was filled in solid with leaves. I also said I would get a picture of the way I hold my q-snap. Now I don't know if I am holding it or even using this thing correctly but it works for me.... If you can imagine I sort of slump with my knees up and the stitching is braced on my right knee underneath...

I keep the extra linen rolled up either beneath, when working at the top of a piece or on top, if working near the bottom. You can see in the background my working copy. Since this chart is broken across six pieces of paper, which I would surely loose count and mess up, I have made copies of everything and tape it together so the it is only three large pieces.

I think I will leave off today with a snap of the Peach with her crazy eyes..... 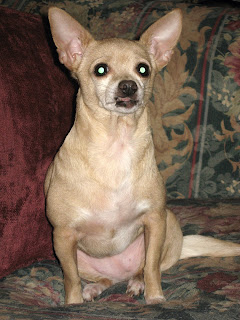 Thanks for stopping by!!
Take care,
edgar
Posted by Edgar at 7:02 AM