Even though this was Oscar weekend I chose not to watch them....for many reasons... the most glaring is that the movies being "honored" I really had not seen as they held no interest for me in either subject, production or direction. I did Watch about 10 mins to see if Tilda Swinton would win the Best Supporting Actress and she did, CONGRATULATIONS!!!!!!
She won it for her performance in "Michael Clayton."
I did not see that particular movie, nor will I, but for her body of work which is stupendous,
I think she has deserved an Oscar for a very long time, very overdue!!!!!!

I did see four movies - "Midway" - 1976, "Big Hand for a Little Lady" - 1966, "Strike up the Band" - 1940 and "Going My Way" - 1944. "Midway" is a very good ensemble movie with lots of big names in some very small rolls. The best thing about this picture is that it cuts original film footage from the battle and from WWII into the picture which enhances the feel of the entire picture. A lesser point of the movie is the silly back story for a couple of the characters. "BHfaLL" is a great film of Joanne Woodwards with quite a twist on the end. "SutB" - is one of the Judy/Micky films and is typically fun and musically lite. The 1944 release of "GMW" won Best Oscar for Bing Crosby and Best Supporting Actor for Bary Fitzgerald and a movie I thought I had seen but after getting into it I realized I hadn't.

I also started back on "Forgiveness" - here is a snap - 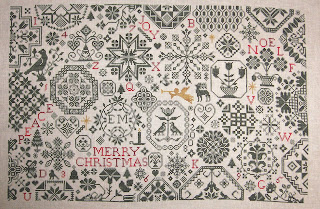 I am really happy with the way this turned out!!!! I did make some changes to the pattern where I though it made more sense or I liked it better, I did it may way! It was a really nice stitching project and I would recommend it to anyone.
I usually don't keep up with starts and finishes but for this one I actually did -

I also took some snaps of the spring flowers on our balcony - Rico has such a green thumb, the only three things I can keep alive are a ficus tree, a Christmas cactus and a Jade plant. But here are the spring snaps -

I did take these in the late afternoon/early evening but from these pictures you would think it was the middle of the night it is so dark....

That's about it for today. Thanks for stopping by!!!!!