A gift received and some BPC stitching....

I heard that a small gift that I sent out has been received - here is a snap -
I made it for Carolyn and it has arrived all in one piece!! 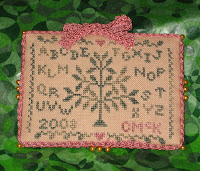 She needed a little something as she is having to focus all her energies towards here family right now. I really enjoyed this stitch and will stitch it again soon!!

This weekend was a total movie weekend.... "The Hindenburg" - 1975, "The Big Country" - 1958.....that was the Saturday and Sunday night big features....then yesterday on TCM was the Memorial Day programming and the focus this year were films about the home front. The films I really enjoyed were "Tomorrow is Forever" - 1946, "Since You Went Away" - 1944 and last but not least - "The Best Years of Our Lives" - 1946 all excellent films. After the film fest I played spin the dial and found a marathon of a show that I really like. The marathon was called "Holiday-Incarceration" a 24 hour event showing of "Lockup." This is a show on MSNBC that goes into Prisons all over the US and talks to prisoners and guards.
I find it fascinating - and just can't stop watching.

It is really coming along!! This is a smaller piece than the BP Sampler so it is stitching up way faster - I already have another Quaker kitted up and heading up the queue... in fact I have quite a few kitted up and ready to go, but that is just one of the guilty pleasures of needlework.... getting all the stuff together and then wondering which one to jump to next....