Final shows and the Sun King

Last night what little stitching I did was on an exchange so there are no snaps from that - it was also the final episodes for "Ugly Betty" and "Grey's Anatomy." Some of the cliff hangers for both shows were a bit predictable..... but overall I enjoyed both and will certainly tune back in the Fall.

I also finished a pretty good book. Working at a book store I often am able to get copies of books before they are published, called advance readers editions. "Mistress of the Sun" is such a book. 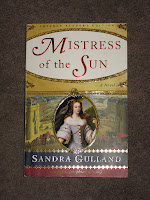 I really enjoyed this historical fiction of the last half of the 17th century and the court of Louis XIV. Sandra Gulland also wrote a series of three books about Joséphine de Beauharnais the first wife of Napoleon. I have not read them but have heard very good things about the series. If you would like this book about Petit and Louis let me know in the comment section and I will send it out to you next week. This book will be published here in the US towards the end on next month, I think it has already been published in Canada.

I hope everyone has a great long weekend - !!! Thanks for stopping by!