Cruella, Corn and some stitching

I don't think I have ever babbled about my love of all things Disney - I am talking old Disney not the majority of new stuff they are pumping out. What I really enjoy about Disney are the parks - WDW and EPCOT in Florida - I have been to both so many times I couldn't begin to count them - I have also been to Disneyland here in California - I had a really great time both times I visited but it is very a very small space a felt cramped and crowded both times - I really prefer the Florida experience. I also really enjoy most of the movies made under the Disney banner. All that said last nights movie was "101 Dalmatians" - 1961 - I just got my copy from Amazon - it was only $8.57 and was supposed to be a "gently used" version, but when it arrived it was brand new never been opened. I just love these movies!!!!

Now the corn part of last night - Rico was watching the Food Network and some cook suggested roasting corn in the oven - the way you do it is buy the corn BUT leave the husk and silk on. Turn the oven on to 350 put the corn with the husk and silk still on in and cook for about an hour. When you take it out of the oven it looks like this - 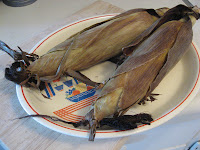 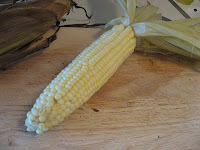 Slap some butter and salt & pepper on it and it is some good eating - It couldn't be easier - We also had fried chicken and rice - one of my favorite dinners!!!!

That's about it - two out going exchanges today - since they have quite a way to go I want them out and on the way - I just have very little faith in the mail system!!!