Today is a damp-rainy day here in the Bay area...I really love the rain and rainy days. It is a kind of drizzle and nothing hard but very nice.

This is a great early morning photo by Thomas Hawk taken from the Ferry Building looking up Market street. This is how it is this morning all reflections and umbrellas.
It is supposed to stop later today and then rain again this weekend.

Last night we had to run errands and so stitching time was curtailed. We had dinner at a Red Robin as Ricos favorite cut of meat is the Hamburger! :)
It was pretty crowded for a Wednesday evening but we were sat very quickly.
After getting home and working some on an exchange piece I settled down for a little time with "Forgiveness." Here is a progress snap -

Still working on the far left medallion. This colour is called Burnished Gold.

The movie last night was "Sea Wife" - 1957. Starring Richard Burton and Joan Collins. Now, this is a movie I had never heard of and found while building my Netflix Queue. It was a different kind of movie with JC playing a Nun, if you can imagine. She makes a really lovely Nun by the way!!! It is a beautiful film shot in CinemaScope of four people adrift in a lifeboat in the South Seas in1942. As nice as this was I would stick to Hitchcock's "Lifeboat" - 1944 - a true Cinematic masterpiece!!! 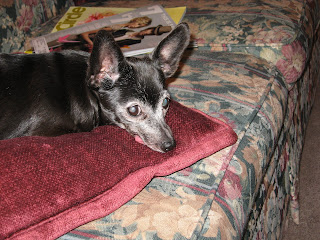 She is the old-grandma dog around our house, and rules it with an iron paw!!!

Thanks for stopping by!!!