GR&DF - Thank you for your comments - always kind and always so nice!! I am so happy that there is interest in the book - as I found it very interesting - and don't worry about the post costs - I don't mind sending anything anywhere - so if you are picked from the BOD - no matter how far from Baghdad by the Bay - that is just my little bit of PIF into the world.

Yesterday was the farmers market - and the post title today is referencing that - sometimes thinking up a posting title is harder than just blogging - and if you have been reading this blog for a while or just look back over the titles - sometimes they can be pretty lame!! The farmers Market is changing - with summer ending and fall knocking on the door - there seemed to be less of things I usually get - I was able to get some basics, tomatoes, grapes, nectarines etc... I also got some Kettle Korn - I usually just pass the stand up as it always seems to have about a bazillion customers and I ain't fighting a crowd for nothing!! But, yesterday I caught him between crushes as he was starting a new kettle of deliciousness....

This stuff is so addictive - I just love the combination of the salt & sugar - not too much of either but just enough!! He packed up a bag of this warm ambrosia and once I got it home last night - I poured out ......

and it may look ordinary but it isn't... yummy!!! ( great Batman angled snap)

Walking back from the market I snapped some government art - 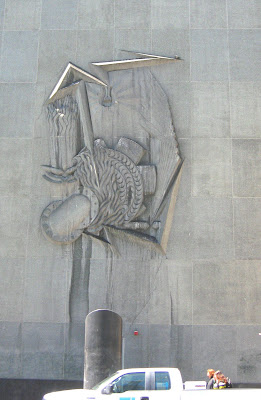 There are a pair of these bas relief sculptures on the electric sub station that I walk past. this one I think illustrates where electricity comes from for SF - water turning turbines - I couldn't remember if I had ever put them on the blog or not - they are nice enough to look at twice. Next week I will put up the other one - I bet you can't wait for that can you!! :)

Stitching last night was mostly on exchange pieces - I did manage to get a strand of two into Sail Away but not enough to warrant a snap - so no stitchity pictures.

The flicker for last night was "This is the Army" - 1943 - starring Joan Leslie, George Murphy, George Tobias, Alan Hale and Ronald Regan. Basically a musical built around the armed forces putting on musical shows - first in WWI then their sons in WWII. A very flag waving, feel good flick with some great Irving Berlin songs. Made as a fund raiser at the time and as with most films made during the war - it is another propaganda picture - and I am not saying that as a bad thing. This film along with two other films was released recently as "the Home front Collection." The other two films are "Thank Your Lucky Stars" and "Hollywood Canteen" - all three films are great patriotic musical gems.

I did want to ask - as I am not sure myself - what exactly does being a "follower" do for blogging or bloggers? Or what do you get - better updates on others blogs or just what????

Once again - thank you for stopping by do come again!!!