Will there ever be a balcony

GR&DF yesterday brought more balcony issues - as you know our balcony was removed back in February - yes February - 7 or so months ago. From the 2nd week of February up to about 3 weeks ago our sliding glass door was sealed and 2/3rds boarded over in a crappy condemned building kind of way. 3 weeks ago the door was uncovered and finally the property owners were getting to our balcony replacement. Now, we had been promised that it would be done and finished by the end of the second week of August - I, of course knew better and said at the time "I'll believe it when I see it!!" Of course the 14th of the month came and went and it wasn't completed. Yesterday we come home to our new and improved balcony railing in pieces all over the parking lot - not only were they going in the opposite direction about getting this project done but had actually broken up the new railings. By about 6 pm the railings where soldered back together, screwed onto the building and sprayed black - but that just puts us back to where we where on the 17th..... I would bet money its another month before they say we can use the damn thing again!!!! Bitter, table for one!!!!

Stitching last night was again on TiTD - I know I should have been working on the Sail Away piece but I wanted to finish up the house. Here is a snap of the finished house and what could possibly pass a a black pidge..... 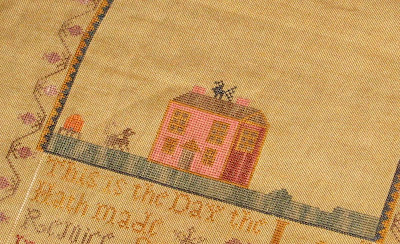 I will start up the next section on Sail Away tonight. I don't want to get to behind. 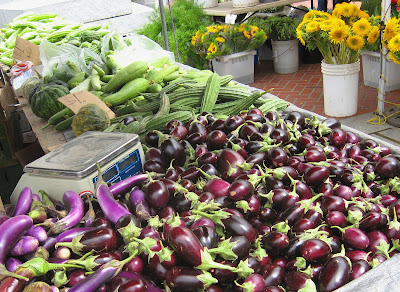 There was a ton of eggplants out - I passed on all of them - as Rico wont eat them and I only like them in a couple of very specific dishes - oh well - they were spectacular in color and volume. Here is another snap - 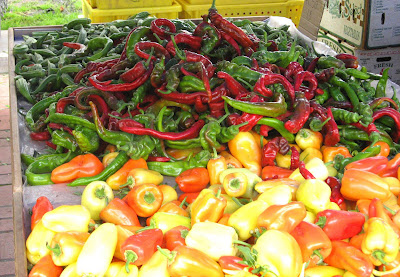 Aren't these some gorgeous peppers!! They were piles of them in many of the booths. My shopping was confined to my usual things, nectarines, tomatoes, string beans, Brussels sprouts - and of course a bag of the salty sweet crack we know fondly as Kettle Korn!! I also got a dozen lovely brown eggs from the new egg vendor. I cooked up some and made egg salad last night. So today I have egg salad for lunch - How bazaar is that piece of information!! :)

The flick last night I wanted to mention was a TV adaptation of "Great Expectations" - 1974 - starring Michael York as the adult Pip and Sarah Miles, James Mason, Robert Morley and Anthony Quayle. A very low key version of the Dickens novel. It was an adequate version but far from spectacular - for spectacular I would look to the David Lean version of the same title done in 1946. The 46 version is so far superior in acting, photography and adaptation it is almost a different story. But, as always these are just my humble opinions - if you like Dickens stick to the 46 version.

There you go sports fans!! Thank you for stopping by and for the kind comments yesterday!!!