...but first there must be the ceremony of the BOD - (bowl of Destiny) - an icy - sparkly - miracle of light and fire - yet no chihuahua was harmed whilst dancing....... the fog clears and out from the mist come our sniffing Who-Hounds. Around and around they go....... then into the bowl for the decision...... 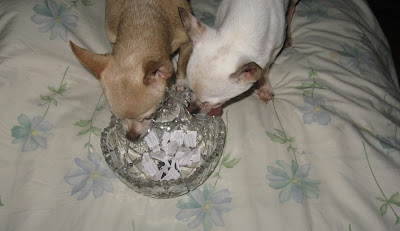 ...yet they were hesitant - and why we ask????? no thumbs - silly - so from the misty nether regions comes forth a hags claw - from whence did this horror occur? Yet into the sparkle and fire dipped the claw..... pulling forth.... a paper on which a single name has been scibbled. The mysterious HC (hag claw) doth present the winner -

We must now leave the worn and slumbering chi's.... 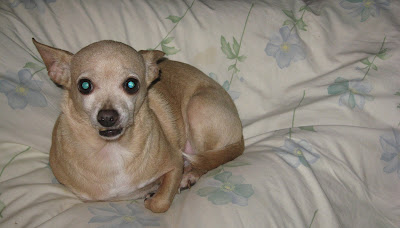 Her Highness - The Peach - and we hear her catch phrase -
"Scratch my butt fool - don't just stand there!!"
and 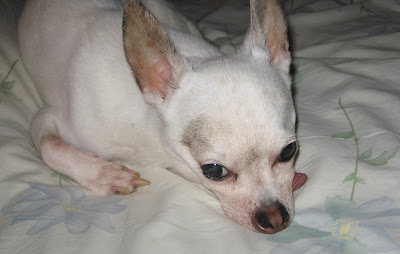 His Imperial Snackasaurusness - Pete - while lolling about he thinks upon which item he must wet before sleep comes - or - in other circles - he is wont to utter "That better be a piece of ham, or there'll be trouble!!"

and we must thank the claw - Merci!!!

The flicker for the evening "Autumn Hearts: A New Beginning" - 2007 - the title in the USA - Released elsewhere as "Emotional Arithmetic" - a Canadian film that is full of beautiful crane shots and vistas. Starring Susan Sarandon, Max von Sydow, Christopher Plummer and Gabriel Byrne. A film about a reunion of deportation camp survivors and the residual emotional baggage each carries after 35 years. Not a happy film - but a thought provoking piece about a noy so nice piece of WWII history with a story line that plods along at a steady clip clop.

I worked a bit on TitD - 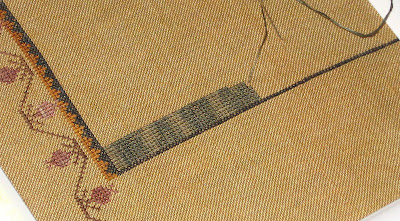 Getting the grass in.

There you go sports fans that wraps up another blog-babble. - Into the mail this morning goes my PS Round 3 - that should take a week or so to reach its new home overseas. Thank you for stopping by and for entering my little Give-a-way - there will another soon.