Gentle Friends I am really happy that you are enjoying my "Travel Log" and so it continues......  today's Post will be interior and art from Mount St-Michel.  Here are some snaps......  there is lots of stone carving about the Abbey, these bas-relief sculptures were set apart and lots of them here are a couple.. 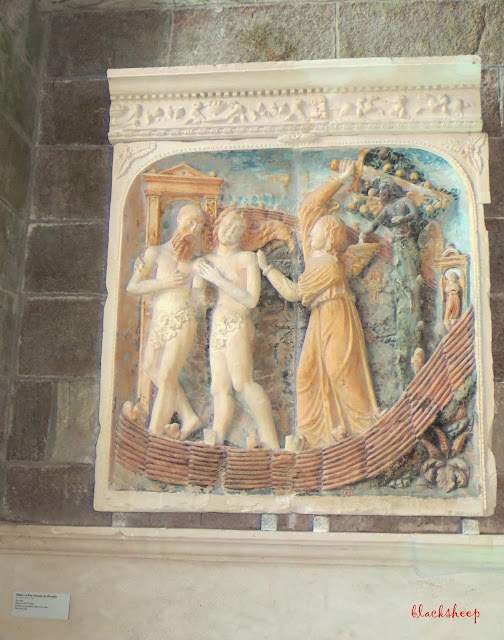 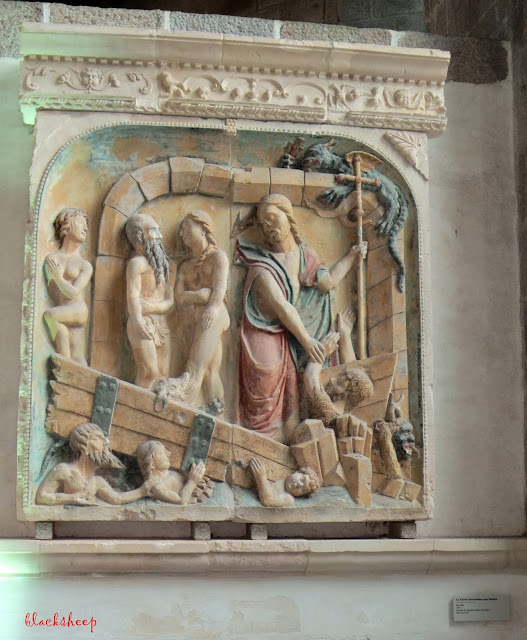 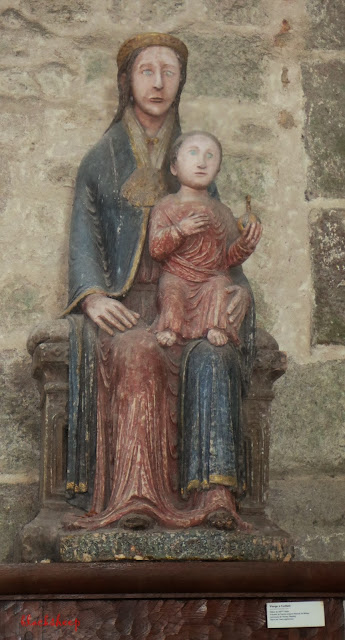 "Vierge et l'enfant" - 13th century - Polychrome stone
These three pieces of art where just spectacular and so fitting for the space.

Moving from the Abbey you go out into the...... 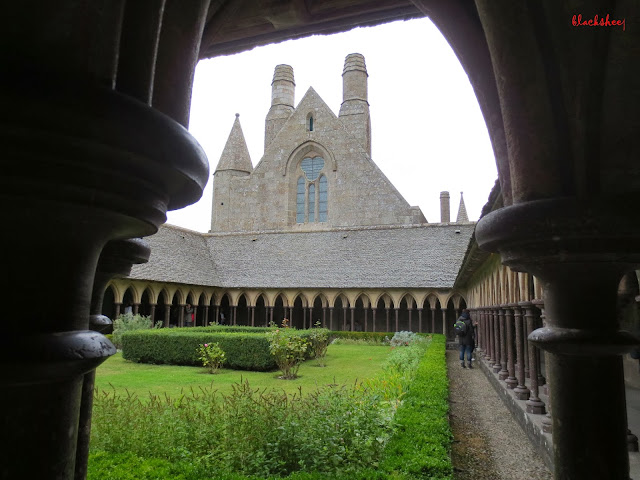 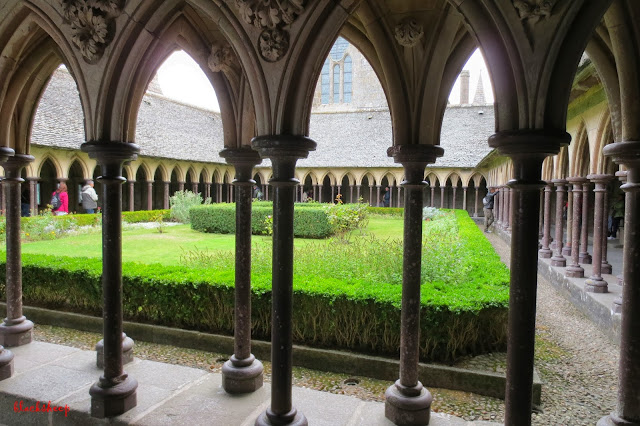 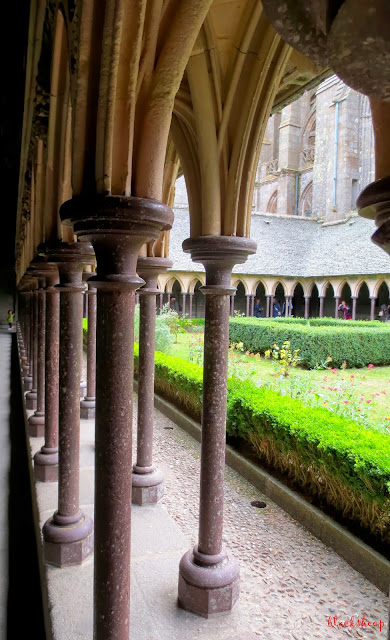 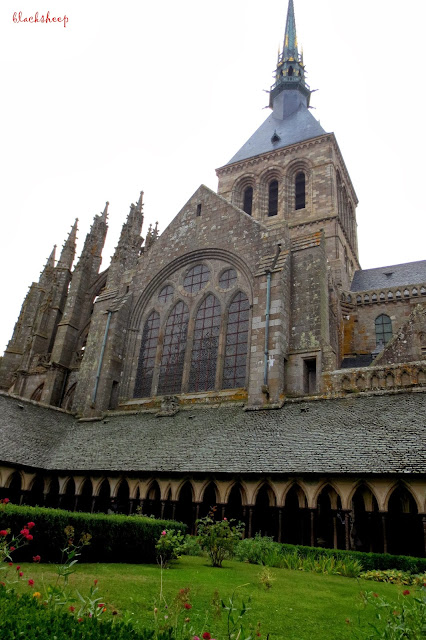 The Cloister - The cloisters are entered from the church. They are the most beautiful part of the Abbey. They are early Gothic (finished in 1228) and are the last part of the complex known as the Merveille to be completed. They are situated above the Knight's Hall. Unlike Romanesque antecedents it does not have figured capitals. The decoration is confined to a floral display on the squinches: roses or leaf-vine designs. Above the squinches runs a frieze of rosettes among which a few barn-owls are distributed (not in my snaps). The two rows of columnettes below are set in a staggered pattern (quite unusual). Soaring above the cloisters are a set of windows of the North Transept. A chapter house at the West side was never built. On the North the cloisters look out over the bay. The fourth side is next to the church as is the case in most cloisters (except here it is along the North not the South church wall). 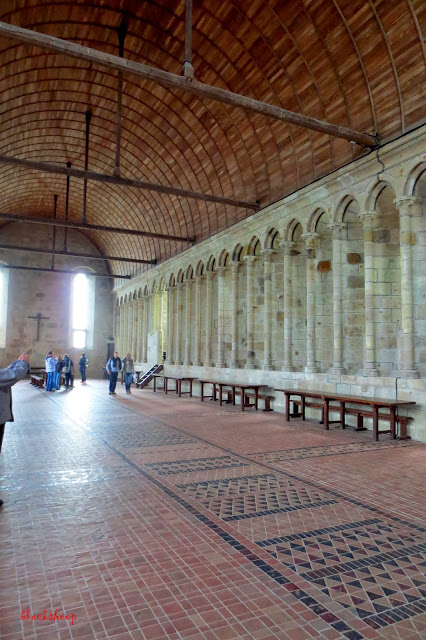 ....moving from the Cloisters into the Refectory....... marrying elements of Gothic and Romanesque design styles the refectory or frater off the cloisters is a magnificent, but simple chamber. The hall dates back to the early thirteenth century and its size – some thirty four metres in length and ten metres in width – indicates that communal meals must have been something special when an obviously large community of monks would have inhabited the church. Refectory sizes are a good indication of the wealth of an abbey, and from this it is evident that the abbey at Mont St Michel was well patronised. The arc vaulted ceiling supported on thick heavy limestone decorated and colonnaded walls resembles an upturned boat hull, and as is the cloister ceiling, is clad with timber slats., again to lighten the load on the buildings built below the Refectory.  Of distinctly Romanesque style are the simple seemingly narrow windows. Although not visible along the length of the salon, some half dozen windows along the length of the room let in an amazing amount of light. Although appearing to be narrow they are some five feet wide and twenty in height. This view to the northern window shows the austerity of decoration – a simple crucifix. The south end holds the pulpit from which a single monk would have recited Biblical texts whilst his colleagues would have eaten their twice daily meatless meals (in accordance with the rules of St Benedict) in otherwise complete silence. The acoustics are superb and his voice would have filled the air of the refectory. 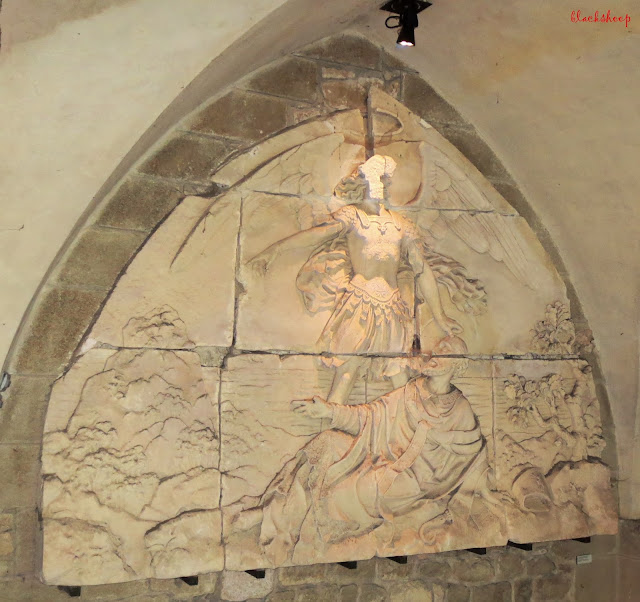 This large caving is....The archangel Michel convincing the bishop (St. Aubert) to build the monastery on this site by burning him on the forehead with his thumb - part of the early history of the building of the Abbey and why this Wonder of the World exists.... 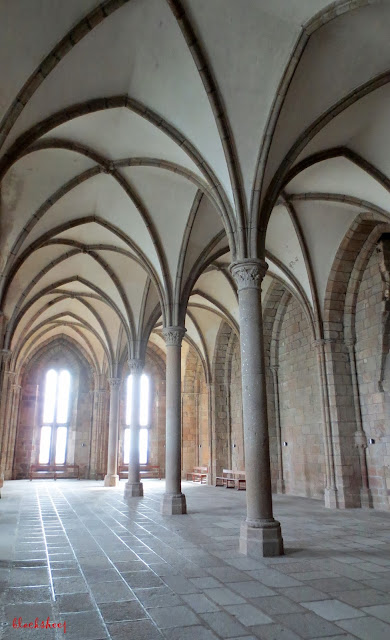 .....moving along from the Refectory you go into... Les Salle des Hotes - Room of hosts (13th century): it is located on the 2nd and last floor of Le Mervielle.  It is a room in which the Nobility and Aristocracy vising the Abbey would have been received. It is separated into two naves by a row of six columns on octagonal bases with double windows at one end and..... 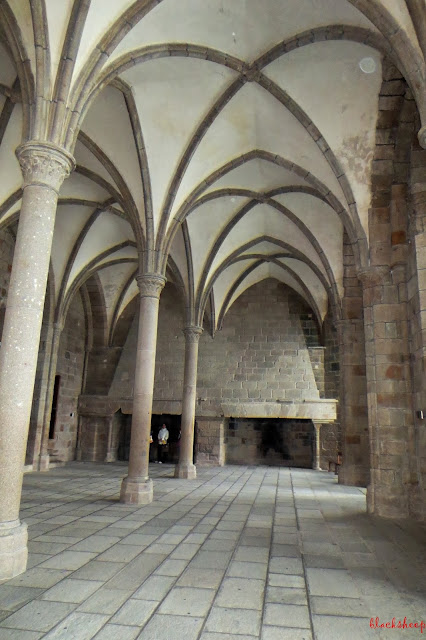 Descending deeper and further back in the building history you come to the crypts where you see gigantic pillars holding everything up.... 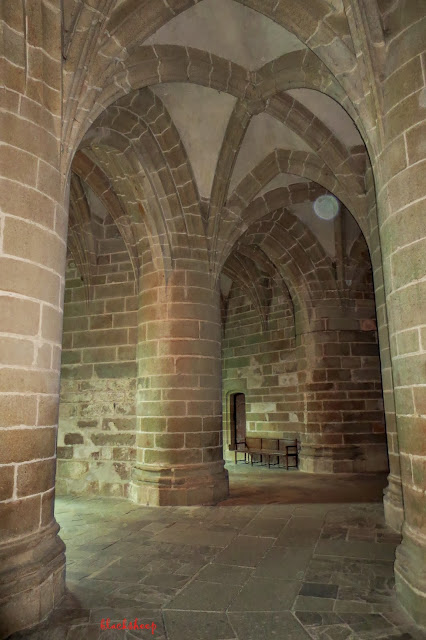 .. it's very hard to get the feel for how big these columns are, but trust me they are huge. 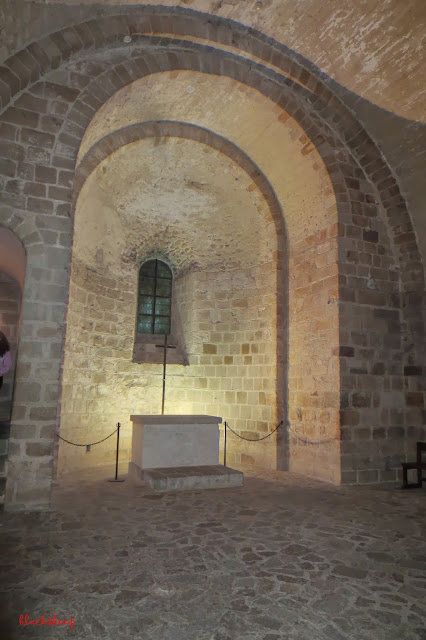 ... part of the oldest and earliest of spaces this is the Chapel des Trent Cirges (Chapel of 30 Candelabra), and is buried under all the other much later construction. 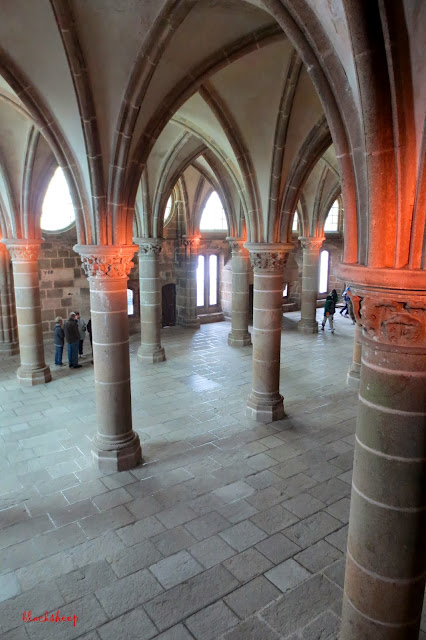 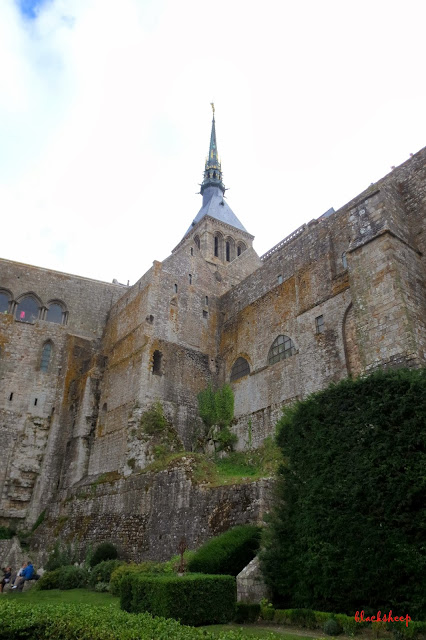 .... as you leave the Abbey you go down some back way and can look up and see all the different building levels and additions.... 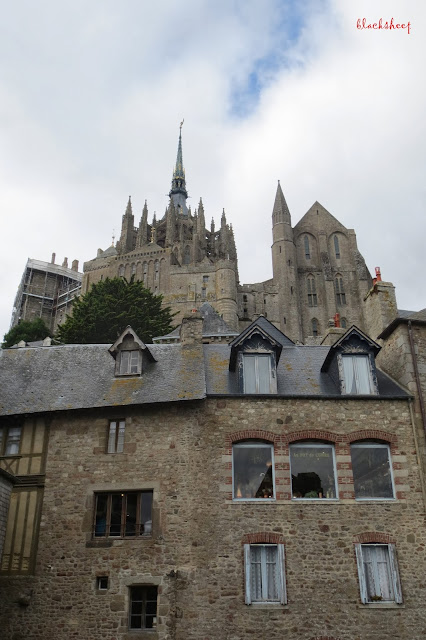 ... and then you can walk along the walls and here is view looking up at the Abbey.

That wraps up Mount Saint-Michel - and the travel log continues next week.....  thanks for stopping by, do stop again!!