Gentle Friends .......from Vannes we headed for the small, but lovely village of Josselin.  We had read about the great Chateau and the lovely church named "Notre Dame du Roncier" (Our Lady of the Brambles) - how could we pass on a French Village like that!!

Let's start with the Chateau de Josselin.  You can visit the ground and the Castle, but you can only visit the inside of the Castle on a guided tour, which is only given in French.  We went on the tour and I was amazed at how much I actually understood. My French is pretty sad at this point in my life from what it once was.... but occasionally I can pull it together enough to understand and also make myself understood.... 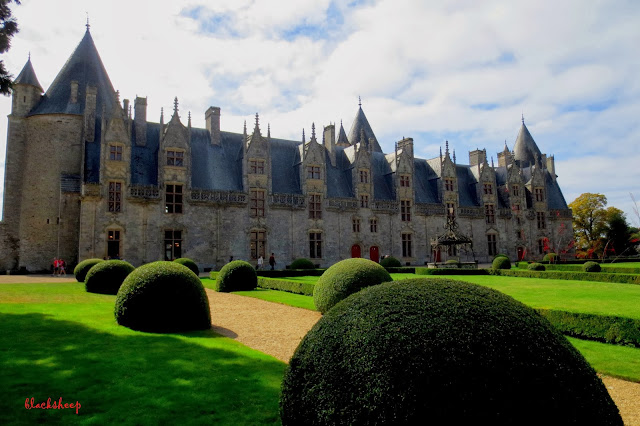 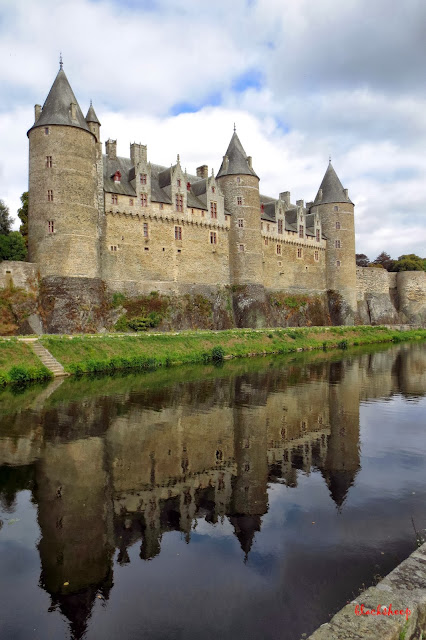 ... the river side is the the most spectacular!!  A little history........."Guéthénoc, vicomte of Porhoet, Rohan and Guemene, began to build the first castle on the site around the year 1008, choosing a rocky promontory overlooking the valley of the Oust. The new fortress was named after Guéthénoc's son, Goscelinus.The name is recorded in the Cartlulary of Redeon Abbey (1080) as castellum et castrum Goscelini. but already by 1108 it was appearing as Castellum Joscelini.  The site chosen for the castle was excellent from both the commercial and the military points of view, and since the 9th century there had also existed an annual  Pilgrimage in September to the Basilica of Our Lady of the Bramble (Notre-Dame du Roncier), which added greatly to the wealth of the lords and people of Josselin.

In 1370 the Breton soldier Olivier de Clisson (1336–1407), later Constable of France, acquired the lordship of Josselin and built an imposing new fortress with eight towers and a keep one hundred yards across.  He married his daughter Beatrice to Alain VIII of Rohan, heir to the viscounts of Rohan, whose own castle was not far away.  In 1488 Francis II, Duke of Brittany, took the castle and partially demolished it. His daughter,  Anne of Brittany,restored it to Jean II of Rohan, a great-grand-son of Olivier de Clisson, who transformed the property and built a noble new house with a fine granite facade, an early example of Renaissance architecture, importing Italian artists and artisans. In recognition of his patroness Anne, sovereign Duchess of Brittany and Queen of France, Rohan added to the facade at several points the sculpted letter A beneath a cord, her badge.  Banned from Josselin due to their Protestantism, Rene II, Viscount of Rohan and the other Rohan men could not prevent the Duke of Mercoeur, then Governor of Brittany, from turning their castle into a base for the Catholic League in its struggles against Henry, IV of France.

In 1603, after being advanced by Henry IV to a dukedom, Henry, Duke of Rohan ,one of the leaders of the insurgent Huguenots, transferred his military headquarters to his Castle of Pontivy. In 1629,Cardinal Richelieu dismantled the Original keep and four of the towers at Josselin and announced to Duke Henry: "My lord, into your game of skittles I have just thrown rather a good ball!"

In the 18th century, the castle was no longer occupied as a seat of power, and during the years of French Revolution and the First french Empire it became a prison and warehouse.  In 1822, Caroline, Duchess du Berry persuaded the then Duke of Rohan, Louis François de Rohan-Chabot, to restore it.  The Castle is still a residence of Josselin de Rohan, fourteenth Duke of Rohan, who was President of the region of Brittany from 1998 to 2004."

It was a really nice tour and great to see inside the Chateau, no photographs allowed, AND nice that the family still uses it, with their private apartments on the second floor.  The tour is only through the First Floor in the big state rooms. 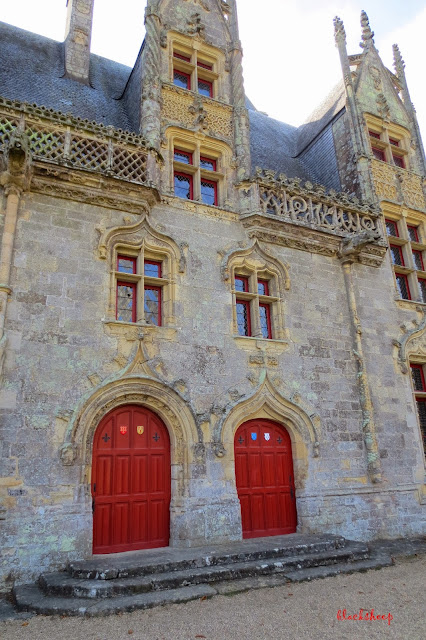 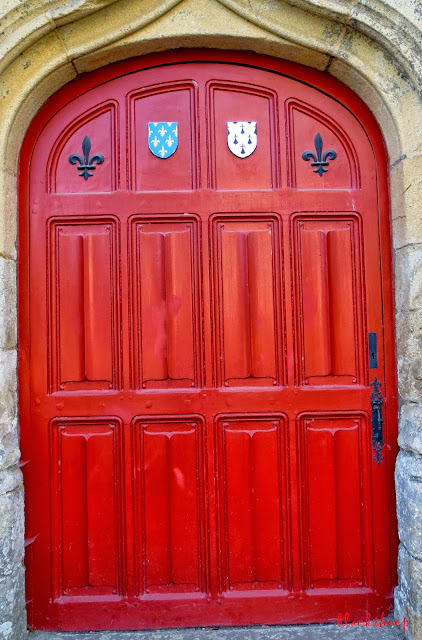 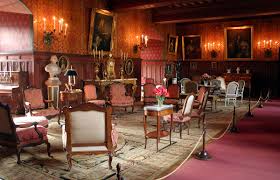 (I lifted this picture from the web, and it is exactly what I saw in the Great Salon) 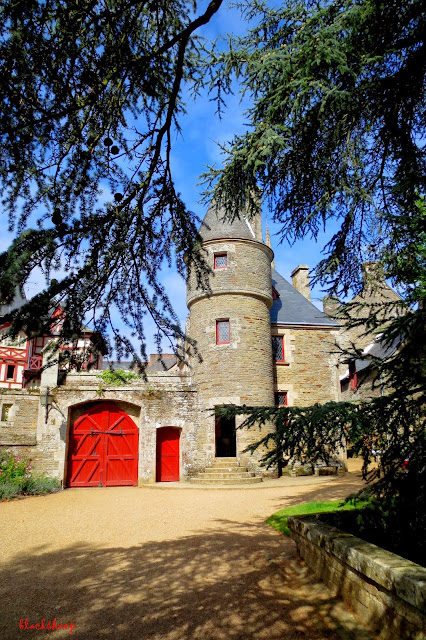 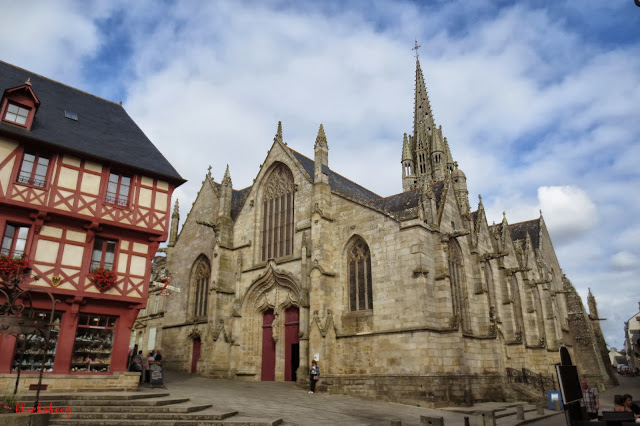 The main square and front of Notre Dame du Ronciare....a little bit o'histoire from Wikipedia...."Saint Meriadek is said to have founded a chapel there during the 4th century. An alternative explanation for the location of the chapel concerns a labourer who in 808 discovered a wooden statue of the Blessed Mother in the brambles which enabled his hitherto blind daughter to see. A chapel was constructed on the site of this miracle which subsequently grew into a church (parts of which date back to the twelfth century)." 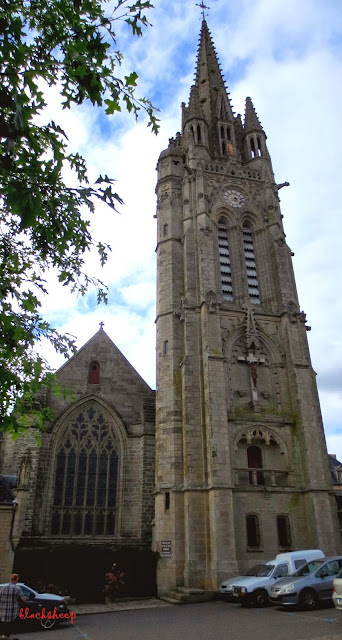 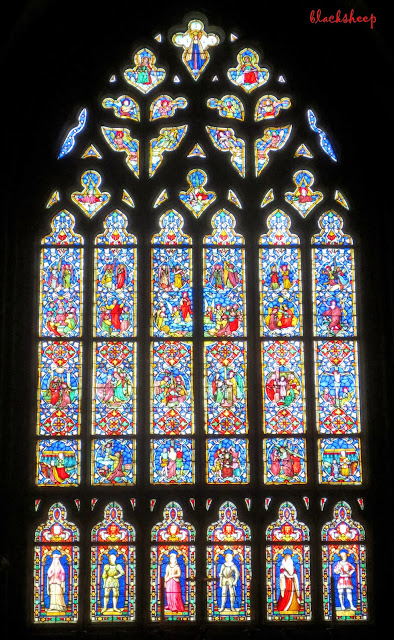 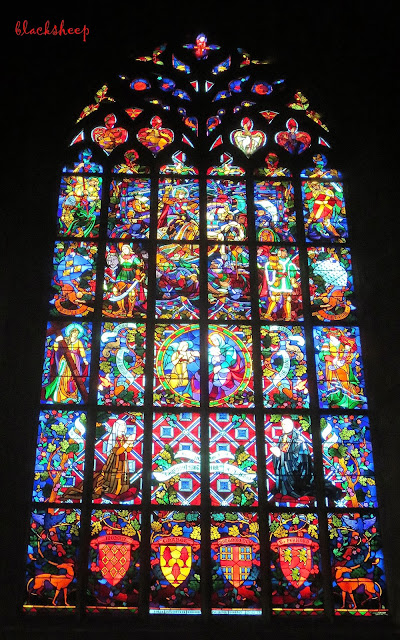 .... and another lovely stained glass window... 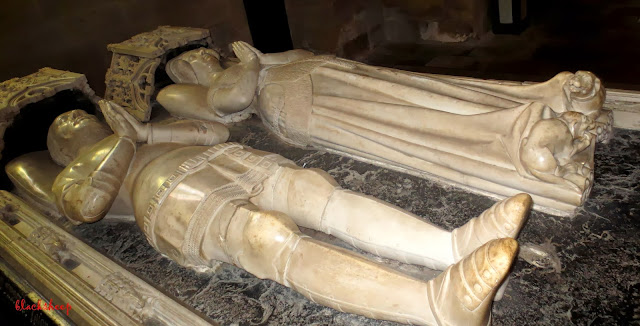 The Cenotaph, of Olivier V de Clisson and his Lady Fair, Marguerite de Rohan, their tomb was desecrated in 1793 and no longer contain their bodies......  and above them this great window...... 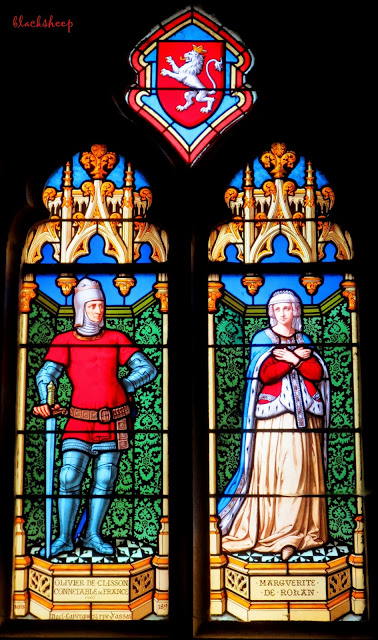 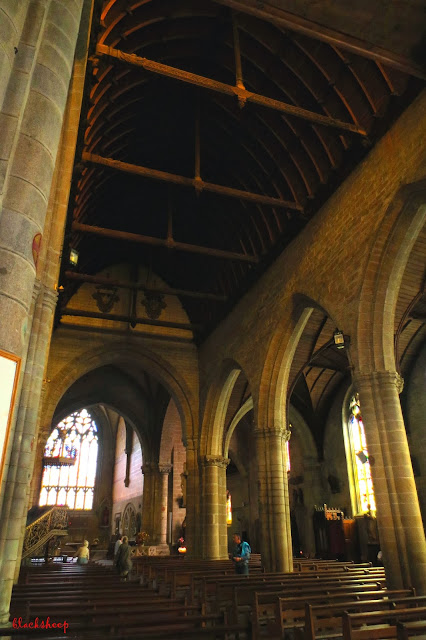 .... and inside shot of the nave and alter, notice once again the wooden vaulted ceiling and the cross bracing, typical in Breton Churches.
_____________
A really wonderful Town I would highly recommend making time for a visit!!  Thanks again for stopping by, do stop again!!