Gentle Friends I will wrap up the stitching with showing the three projects I took with me to France.  I knew ahead of time that my trip going over would include a looong layover in Paris waiting fro my connecting flight to Brest so I took "Thy Needle" as a sort of time fill to work on, and with the flights and everything I ended up with a finish....  can you believe it!!! 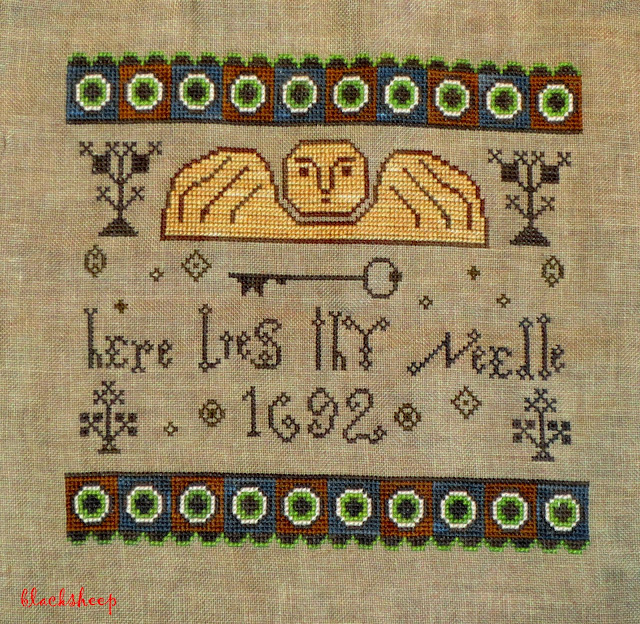 I also took along "Baby It's Cold Outside" and here is where that piece is... 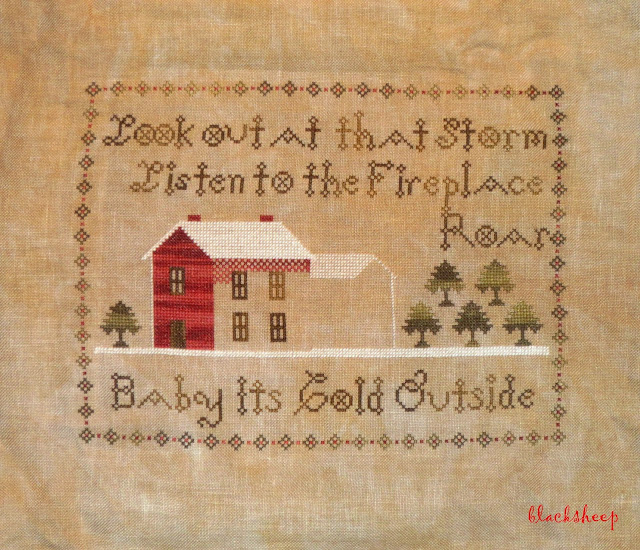 I also took along a piece I wasn't sure I would even get too, but better to much than not enough....  it is "Feast of Friendship" I had it kitted up so it was easy to throw in the suitcase.  Here is where it stands at the moment.... 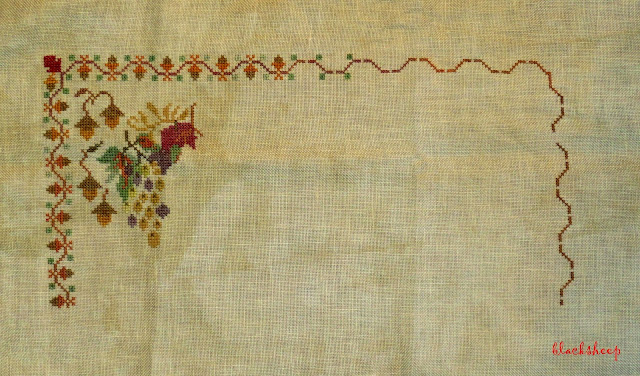 I started this on 9/18 at the house in Brittany.  The only change I made to the floss palette is the green, I didn't like my skein of the colour recommended so I switched it for one I did like.

Now, on to France.....  When I arrived in Brest is was a rainy cold/cool day. It was late in the day so we drove in and out of sprinkles all the way to Perros-Guirec, about 45 minutes north.  This town is located on a Bay on a tip of land that juts out into the Celtic Sea/ English Channel.  The house is called Ker Juliette..  Ker is the word in the Breton word meaning house.  Here's a snap I took later in the week... 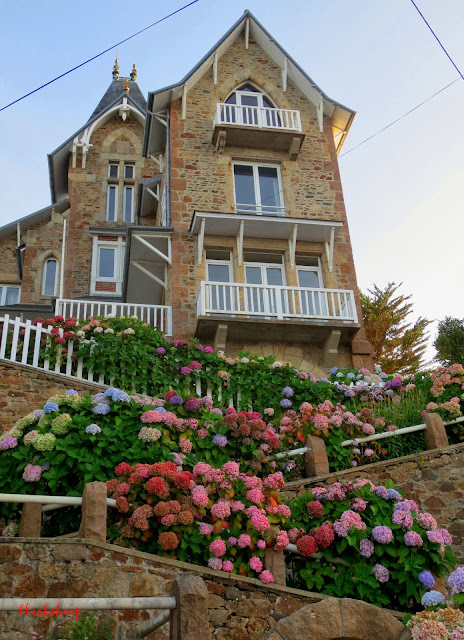 I was in the room with double windows on the second floor.  I'll show some more snaps of Perros-Guirec later on.....  The next day was my first day out and about, it was a rainy overcast day, but that didn't stop us one bit.  Chris and Mo had rented a car when they got there, and had already done a lot of exploring.  On place they wanted to go back to was a 15th century Castle called Chateau de Tonquedec..... we got there and it was supposed to be the last open day for the castle, but it never did open, I guess the weather was a factor.  While we were there two other cars of people pulled up to see it, but to no avail. 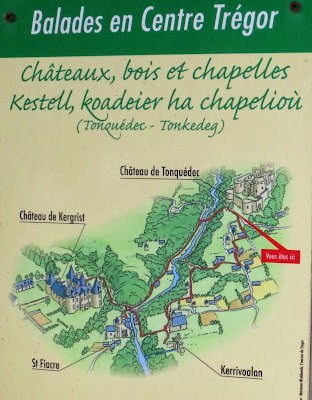 This is the map that was near the Castle, it also shows Chateau de Kergrist, our next visit...  but here are some snaps of de Tonquedec.. 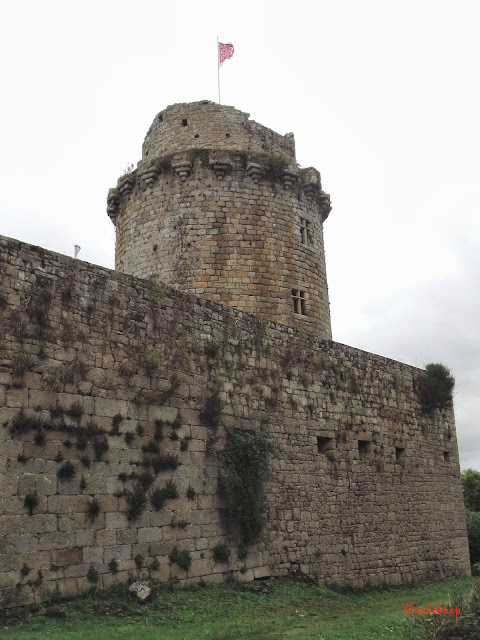 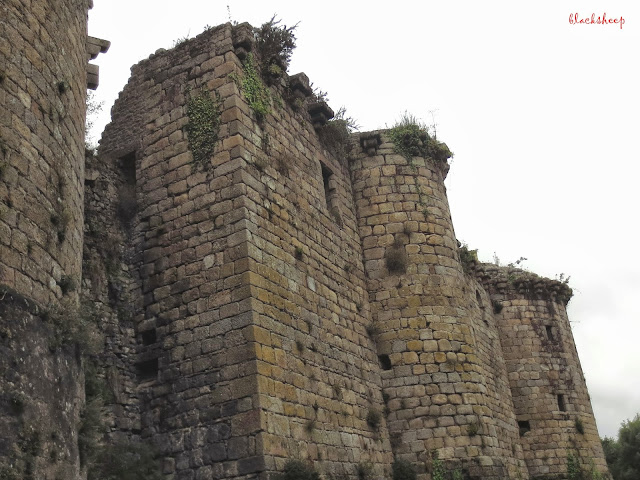 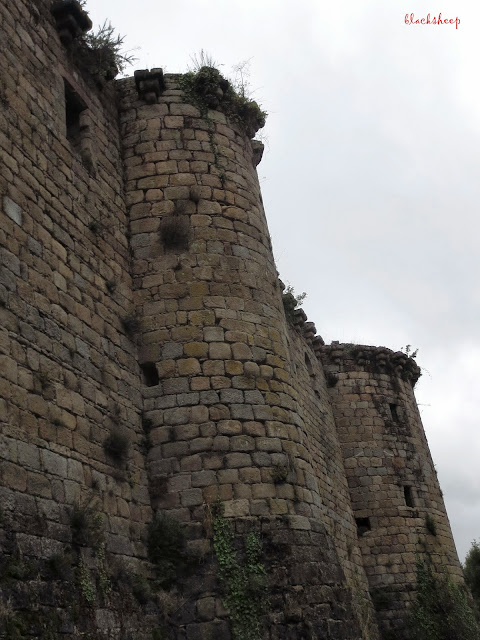 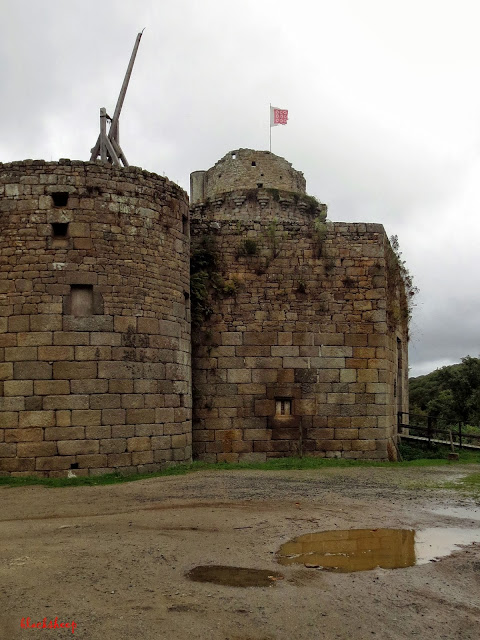 ... and some info from Wikipedia...."The Château de Tonquédec is a castle in Brittany, France, and one of the most visited monuments in the département of the Côtes d'Armor. One of the most impressive French medieval sites, this château-fort, stands in a pleasant green forested countryside about 8.5 km (5.3 mi) south of Lannion. The present castle was built in the 15th century, on the site of an earlier 12th-century castle.
History
From the height of a rocky cliff, the castle ruins, with its eleven towers and a closed curtain wall, dominates the valley of the Léguer. It is a genuine vestige of feudal Brittany. The 12th-century castle was the work of the Coëtmen-Penthièvre family. It was partially dismantled by order of Jean IV, Duke of Brittany, in 1395 because of a conflict between him and the Penthièvres. Indeed, Rolland II and Rolland III of Coëtmen, Viscounts of Tonquédec, had allied themselves to the rebellion of Olivier de Clisson.  Reconstruction began in 1406 by Rolland IV of Coëtmen. The castle subsequently changed owners several times, before becoming an artillery base in 1577. At this time, the owning family (Goyon de La Moussaye), being Protestant, was therefore in disagreement with the king, Henri IV. During the War of the League, the castle was a hiding place for Huguenots. It was finally dismantled around 1622 on the orders of the powerful Cardinal Richelieu.
The castle currently belongs to descendants of the original builders (House of Coëtmen-Penthièvre): Count and Countess Bertrand de Rougé. Since 1862, it has been listed as a monument historique by the French Ministry of Culture.
Visiting the castle
The entrance gate leads to an outer fortified courtyard or basse-cour. Two towers, joined by a curtain wall, frame the entrance to the inner courtyard which is reached by a postern, once protected by a moat and drawbridge. The keep with walls 4 m (13 ft) thick, stands detached from the curtain walls, at the rear of the ensemble. The view from the top gives a good idea of the local countryside: "a wide, fertile and populous plateau is intersected by deep and wooded picturesque valleys."  Since it was closed we walked around the Castle and the grounds and what is left is really impressive!!

We wanted to visit Chateaux de Kergrist, and thought it would be easy to find, boy were we wrong.  Brittany is very rural and there are few major roads, most are two lane country roads, lovely driving but lousy for getting somewhere fast.  And, there are few if any signs.....  here's the sign on the road for the Chateaux... 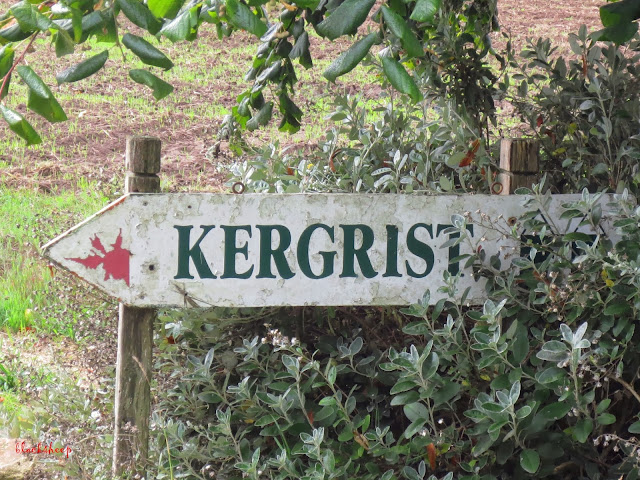 There were other signs, but not many.  After driving around awhile and listening to the GPS tell us where to go and turn here and turn there (we had Marge Simpson as the voice, it was really funny!!) we eventually made it to the Chateaux.  We were the only visitors the when we arrived and the entire time we were there.  I think the guy at the ticket building (the old stable had been converted) was really surprised to see anyone.  Here are some snaps of this small and lovely Chateaux.....(remember it was a rainy overcast day so they are on the flat side) 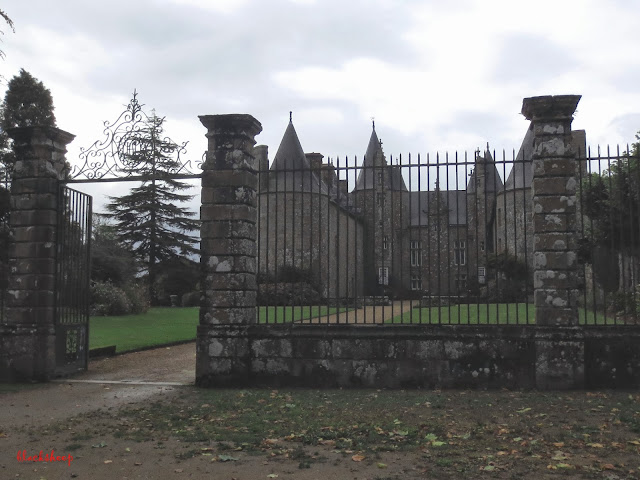 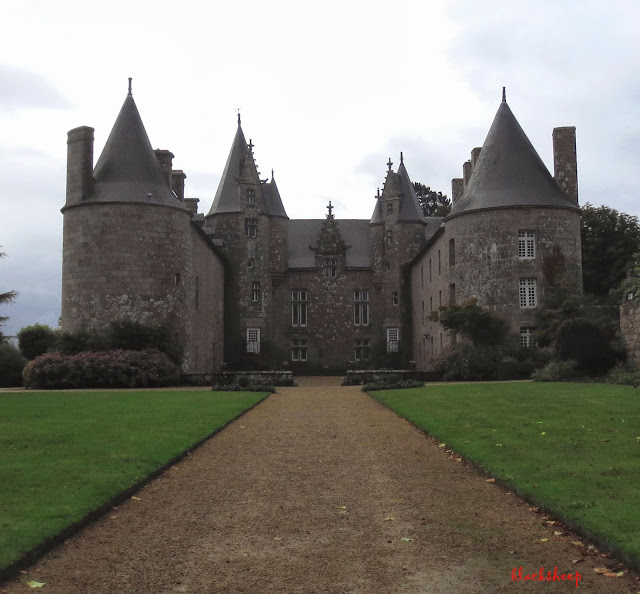 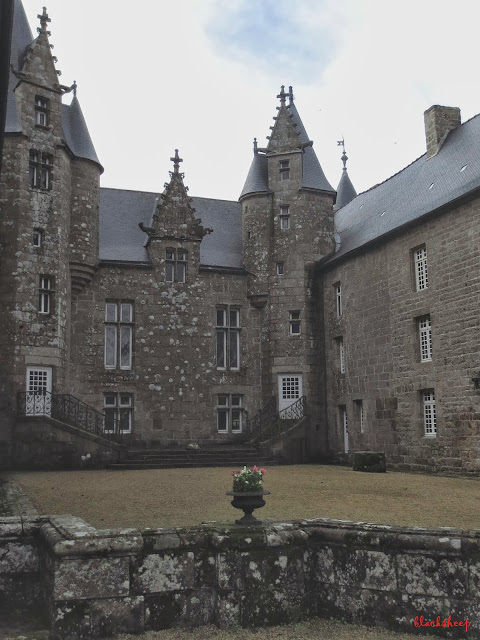 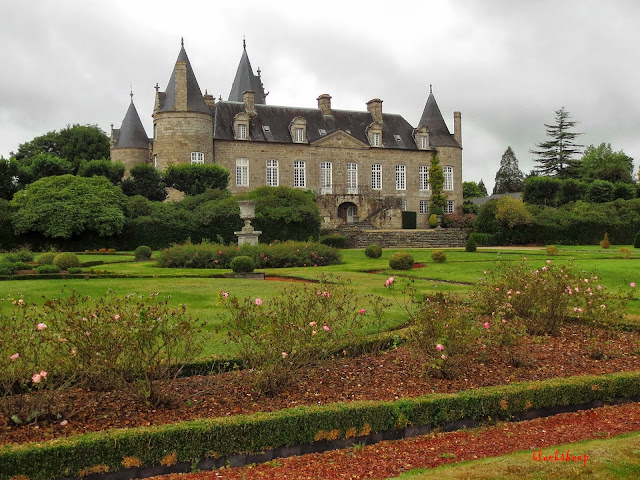 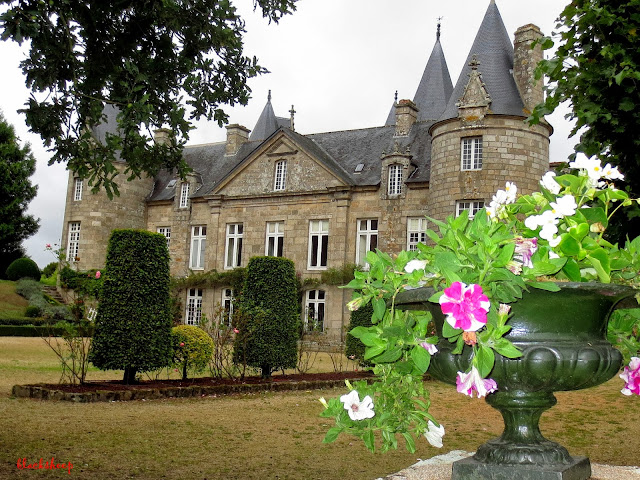 The South Facade
.... and some info from Wikipedia.... "The name comes from the Breton Kergrist ker meaning "home" or "big house" and grist is a mutated form of the name of Christ . The castle is the "house of Christ."
Geography
The castle is located in Brittany , in the historical region of Treg , the department of Côtes-d'Armor and the town of Ploubezre . The Leaving , one of the rivers in France's most renowned salmon passes below the park, before emptying into the English Channel.  It is positioned 8 km from Lannion , 45 km from Morlaix and 72 km from Saint-Brieuc .  The provincial road 11 passes near the castle.(a two lane country road...) History
The fifteenth and sixteenth centuries: Construction of the mansion began in the 15th century at the request of Kergrist Jehan and his wife Gilette the Cozic. This is a typical Breton mansion of the Renaissance: an octagonal tower surrounded by two main body home. An archway allowed access from the north courtyard, the enclosed garden to the south. In the 16th century a second tower is erected opposite the first, in larger proportions.
The seventeenth and eighteenth centuries: At that time, Mary Kergrist, the last descendant of the family, wife of Jonathan Kergariou : the house changed owners. To the east, a classical facade was erected, a double staircase leads in straight flights of stairs to the current French garden. The mansion became a castle. In the 18th century, Barbier, Marquis Lescoët, take possession of the castle by marital alliance with Kergariou. It was abandoned in the French Revolution (1792). The Chateaux was sold as national property during the Revolution, the area was fragmented into three parts and sold and the castle contents were plundered.  In 1860, Charles and Julien Huon Penanster recovered the domain, their grandfather and father, Pierre and Michel Huon (royal notaries), mandated by the Barber of Lescoët had reunited. Caroline, grandmother of Charles and Julien raises the Penanster name at the request of his uncle. Charles gets approved by a decree of the Minister of Justice, and a judgment of the Civil Court dated 1864. They restore the castle and its park, in a 17th century style. They will try to buy antiques, and fill the house in the style of the 18th century.  Thus they acquire the woodwork of the Abbey of Beauport near Paimpol, to be consistent with the date of building facades. Charles also buys old masters (Rubens, Giordano), as well as original wood panels Henri II (XVI century), with whom he commissioned neo-Renaissance furniture.The facades of the monument are the subject of a registration under the historical monuments on 20 January 1926 .  Architecture Kergrist is a typical Renaissance manor of Treg, with added later facades XVII and XVIII centuries.The former stables are still visible in front of the castle, well than fully refurbished into a house.
Park and Forest
Until the Revolution, the gardens were relatively sparse, consisting of flowering meadows down to the Leaving. Under the Second Empire, the four acre garden are completely reorganized under the leadership of Charles and Claire Huon Penanster, new owners of the domain. This passion for landscape art reconstructs all gardens to echo the different facades. In the north, the beds agree sober facade Renaissance (XV-XVI). To the east, the French garden, inspired by a plan of André Le Nôtre, is displayed on a street of a granite balustrade terrace, to meet the seventeenth facade. To the south, an English garden is invited to a facade of "Louis XIV style" designed in the eighteenth century.
Many mature trees, sometimes dating back to the eighteenth and nineteenth centuries, have fallen prey to winds up to 180 km / h. Drained and then uprooted, they fell during the storm of 1987."
___________________

That's about it for today sports fans.  Thanks again for stopping by, do stop again....