Gentle Friends there are many things I am sure that we all have on our own Private "Bucket Lists."  My Bucket list of things to do and see, before checking out, contains many buildings and sites around the world....  Pavlovsk Palace, Russia, Angkor Wat, Cambodia, Machu Picchu, Peru, Heian Palace, Kyoto.... and the list goes on and on....  I have seen and done many things on my list over the years, and one of them I can check off from this trip... seeing and walking around Mount Saint-Michel.  I took lots of snaps so I'll be breaking them up across two days......
_________________

It was another over cast day with sporadic sunny breaks, so the pictures fluctuate back and forth.  Finding the Mount is very easy as there are lots of signs and it is a famous pilgrimage site with lots of tourists visiting year round.  There is a new car park/information Centre about 2 km from the Mount and a "free" shuttle from the Car park to the Mount and back.  Free is a relative term since you pay for parking I would think you are indirectly paying for the "Free Ride."  But, it is a nice gesture and if a shuttle ride is not what you want there is a sort of horse drawn cart type ride or you can walk the distance across the causeway - all to get to the Mount.... 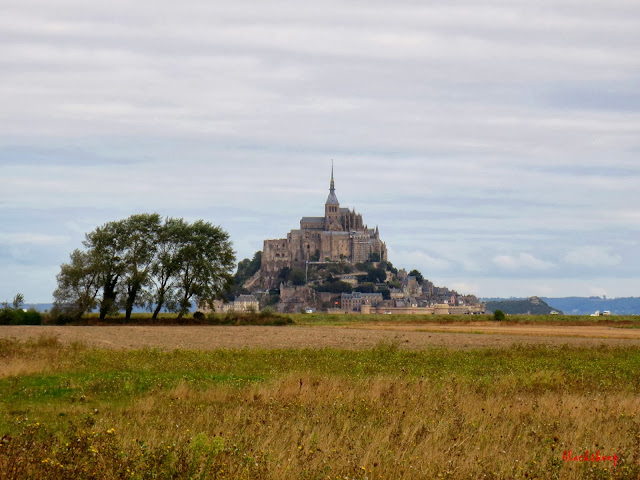 The Mount from the car park.... I was totally excited at this point and didn't come off the cloud until we were leaving!!!!

Today I'll show the snaps going up the Mount and the Main Abbey Sanctuary at the top..... 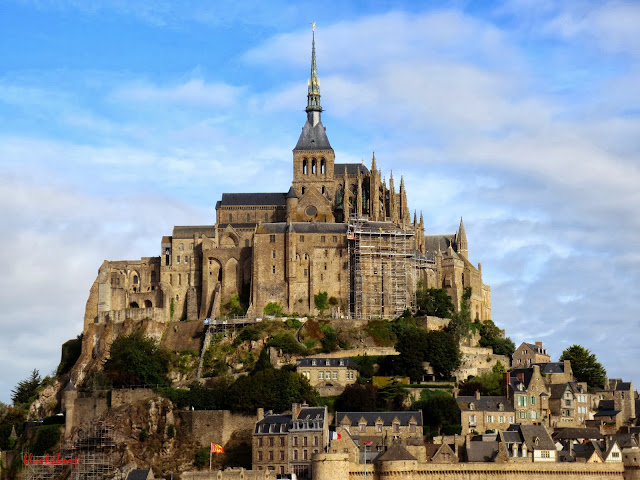 ... getting closer, walking up the causeway after getting dropped off the Shuttle...... there is always lots of scaffolding all over these sites so that little bit to the right I expected. 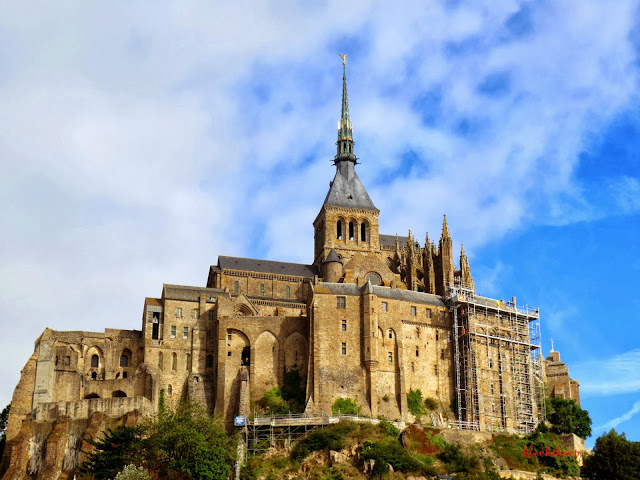 ... closer still, as it looms over the mud flats... I could imagine a pilgrim slowly approaching this wonderful place!! 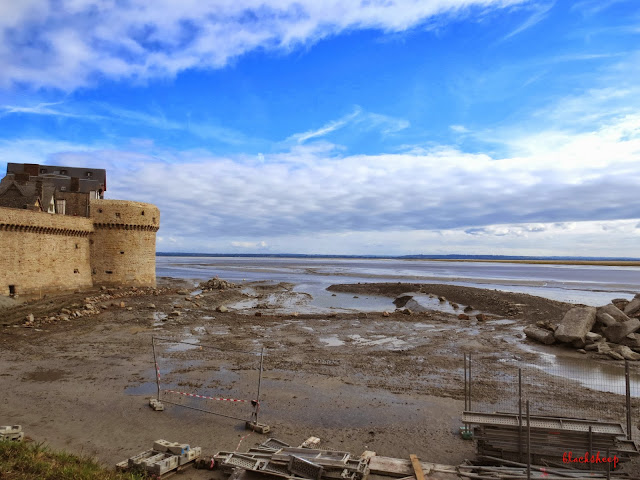 ... the mud flats of quick sand that have protected this place for centuries.....  they are being restored to let the tidal flow return to a more natural state.... 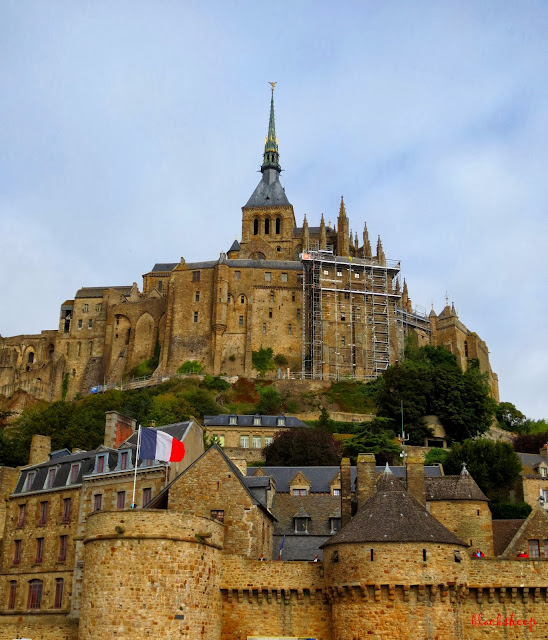 I just liked this shot because the breeze caught the lovely tri-coloured French flag and unfurled it snapping and cracking with the wind..... 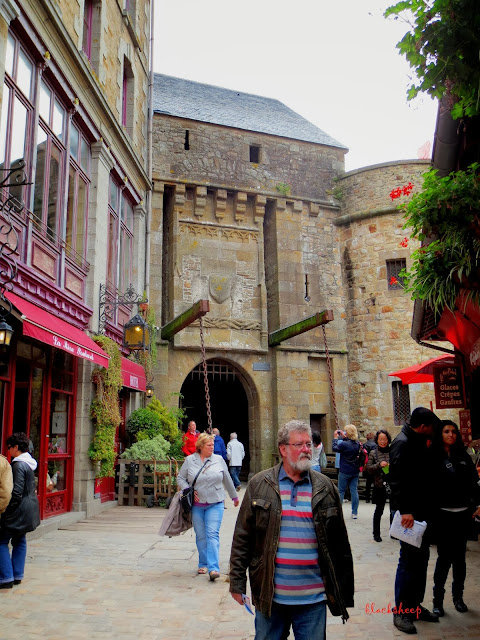 ...  after entering The Porte de l'Avancée, the main gate at the end of the causeway, 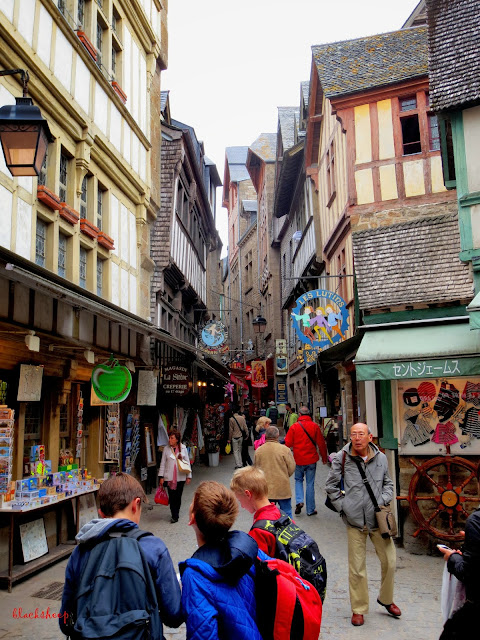 ..  this leads straight to the Grande Rue, which is packed chock-a-block with souvenir shops and tourists..... 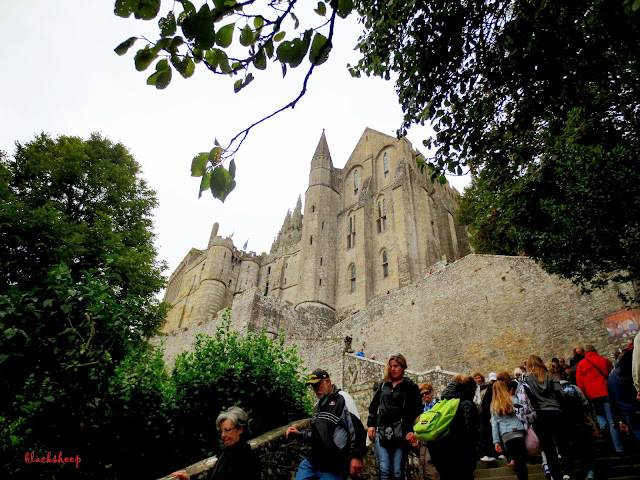 ... after passing through all the streets of town you pass onto the actual church grounds and more steps and climbing.....  it's like walking to heaven, up,up,up,up.... (a bit dramatic, but you get the idea)... 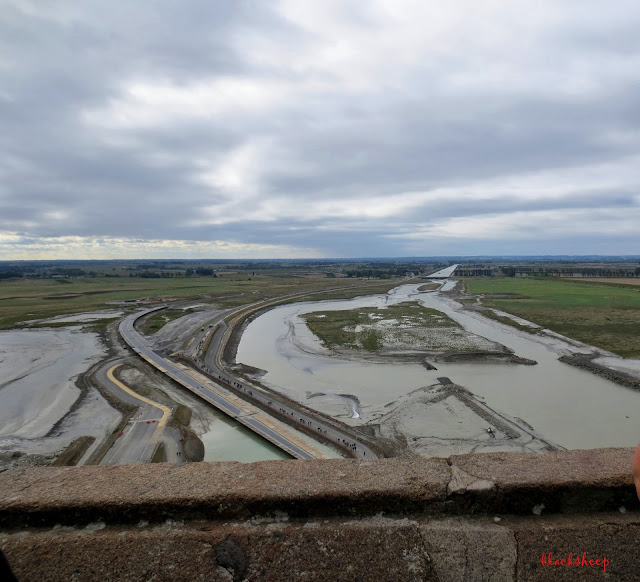 ... looking down from the ramparts onto the causeway we had so recently walked across, you can see the shuttle park  in the mid distance..... and the dam on the Coueson River that controls the flow into the tidal basin and the historical removal of silting up around the island. 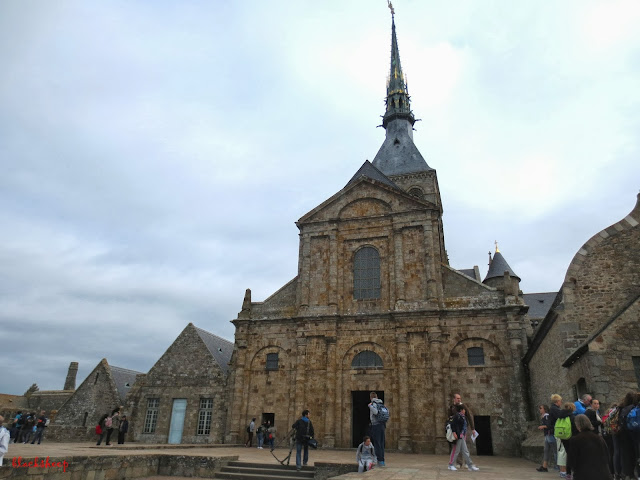 ... at the very top you are confronted with the Abby of St Michel.  And, when you turn around and look out to Sea..... 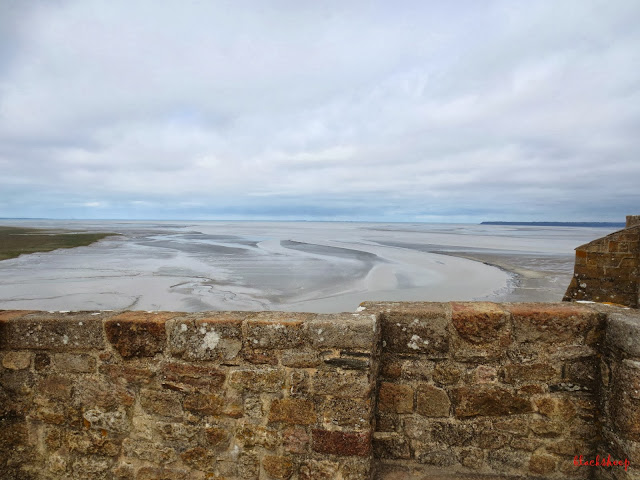 Turning back around and going into the Abby itself you are confronted with..... 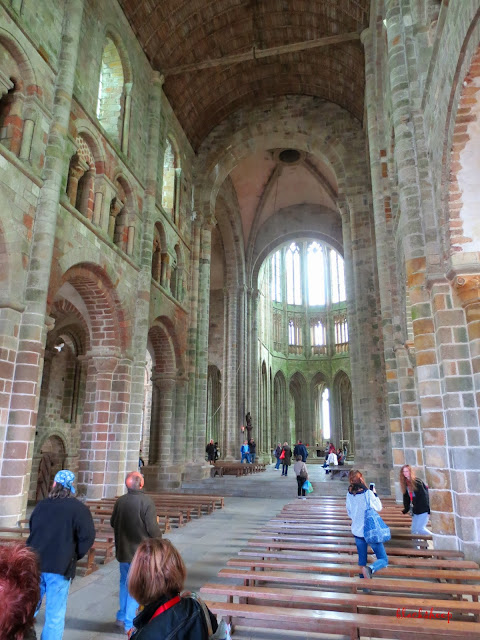 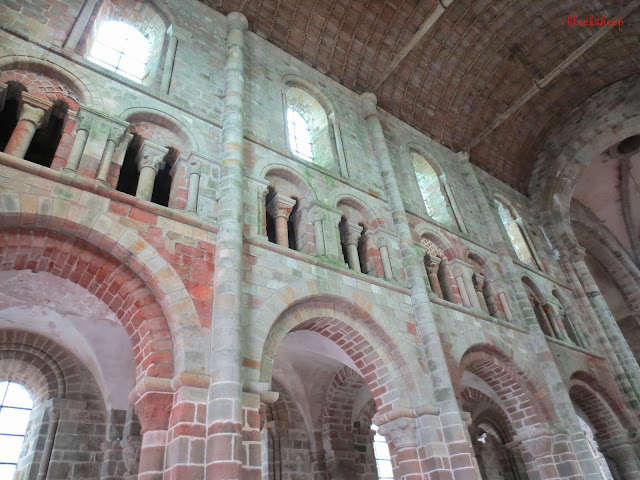 ... and this beautiful triple Romanesque Clerestory of arches.... holding up the "light" wooden vault.... 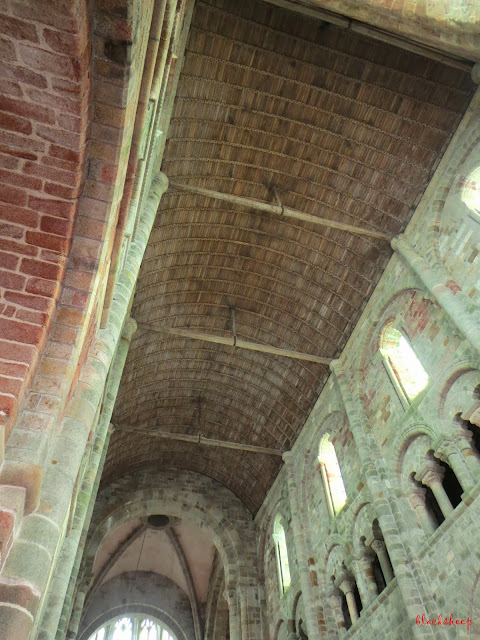 .... the vaults are all of wood instead of stone to keep the weight down.  With every space being built on top of an older piece or building the weight load was an essential component to the building... 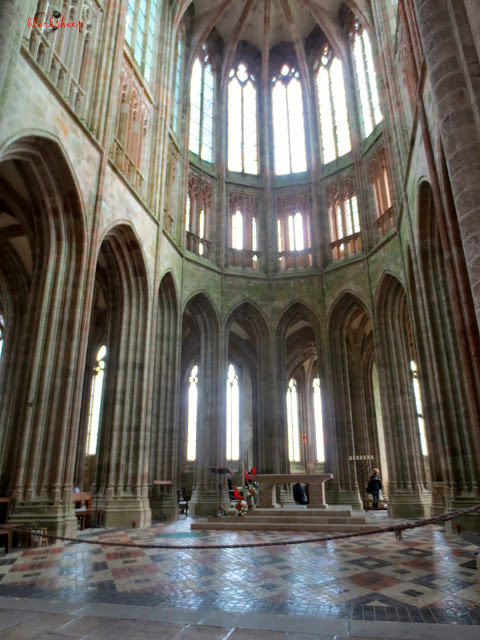 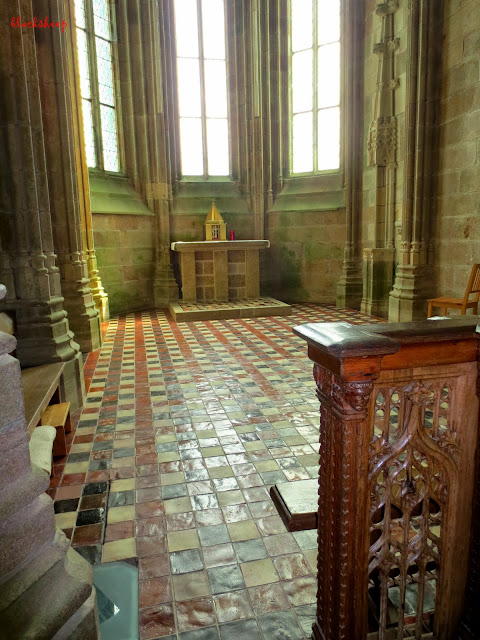 Here's a little History from Wikipedia... "Mont Saint-Michel was used in the sixth and seventh centuries as an Armorican stronghold of Gallo-Roman culture and power until it was ransacked by the Franks, thus ending the trans-channel culture that had stood since the departure of the Romans in AD 460. From roughly the fifth to the eighth century, Mont Saint-Michel belonged to the territory of Neustria, and in the early ninth century was an important place in the marches of Neustria.  Before the construction of the first monastic establishment in the 8th century, the island was called Mont Tombe (Latin: tumba). According to legend, the Archangel Michael appeared in 708 to St. Aubert, the bishop of Avranches, and instructed him to build a church on the rocky islet. Aubert repeatedly ignored the angel's instruction until Michael burned a hole in the bishop's skull with his finger.
Unable to defend his kingdom against the assaults of the Vikings, the king of the Franks agreed to grant the Cotentin peninsula and the Avranchin, including Mont-Saint-Michel, to the Bretons in the 867 Treaty of Compiègne. This marked the beginning of the brief period of Breton possession of the Mont. In fact, these lands and Mont Saint-Michel were never really included in the duchy of Brittany and remained independent bishoprics from the newly created Breton archbishopric of Dol. When Rollo confirmed Franco as archbishop of Rouen, these traditional dependences of the Rouen archbishopric were retained in it.
The mount gained strategic significance again in 933 when William "Long Sword" annexed the Cotentin Peninsula from the weakened Dukes of Brittany. This made the mount definitively part of Normandy, and is depicted in the Bayeux Tapestry, which commemorates the 1066 Norman conquest of England. Harold, Earl of Wessex is pictured on the tapestry rescuing two Norman knights from the quicksand in the tidal flats during a battle with Conan II, Duke of Brittany. Norman Ducal patronage financed the spectacular Norman architecture of the abbey in subsequent centuries.
______________

In 1067, the monastery of Mont Saint-Michel gave its support to Duke William of Normandy in his claim to the throne of England. This he rewarded with properties and grounds on the English side of the Channel, including a small island off the southwestern coast of Cornwall which was modeled after the Mount and became a Norman priory named St Michael's Mount of Penzance.
During the Hundred Years' War, the English made repeated assaults on the island, but were unable to seize it due to the abbey's improved fortifications. The English initially besieged the Mont in 1423-4, and then again in 1433-4 with English forces under the command of Thomas Scalles. Two wrought-iron bombards that Scalles abandoned when he gave up his siege are still on site. They are known as les Michelettes. Mont Saint-Michel's resolute resistance inspired the French, especially Joan of Arc.
Abbey design - In the 11th century, William de Volpiano, the Italian architect who had built the Abbey of Fécamp in Normandy, was chosen by Richard II of Normandy to be the building contractor. He designed the Romanesque church of the abbey, daringly placing the transept crossing at the top of the mount. Many underground crypts and chapels had to be built to compensate for this weight; these formed the basis for the supportive upward structure that can be seen today. Today Mont Saint-Michel is seen as a Romanesque style church.
Robert de Thorigny, a great supporter of Henry II of England (who was also Duke of Normandy), reinforced the structure of the buildings and built the main façade of the church in the 12th century. In 1204, the Breton Guy de Thouars, allied to the King of France, undertook the siege of the Mount. After having set fire to the village and having massacred the population, he was obliged to beat a retreat under the powerful walls of the abbey. Unfortunately, the fire which he himself lit extended to the buildings, and the roofs fell prey to the flames. Horrified by the cruelty and the exactions of his Breton ally, Philip Augustus offered Abbot Jourdain a grant for the construction of a new Gothic-style architectural set which included the addition of the refectory and cloister.
Charles VI is credited with adding major fortifications to the abbey-mount, building towers, successive courtyards, and strengthening the ramparts."
__________________

There's lots more to come.  I hope you are enjoying my little Travel Log.  I usually keep one when I travel, but thought about it and decided to turn these Blog Posts into my Log of the trip.....

Thanks for stopping by, do stop again!!