GR&DF such wonderful comments and emails - am I bursting with a big heart of love or what!!! Choking me up on a Friday is not fair - but I do appreciate every single comment, email and good thought sent my way. I know that the email has been completely eradicated by a super group of friends out there - and as Marnie put it "Mean People Suck."
Enough of that we are moving on....

The blue tree was identified not only by Alison but by a friend here at work - he is a minor horticulturalist and yard designer/gardener type and it is a Ceanothus - they come in three very distinct sizes - Tree, Bush and low growing spreading vine - all have this vibrant blue flower or they can also be white. Many folks thought it might be a Jacaranda - but this tree the flower shape was a bit less bell shaped and more cluster like.
So many things I don't know - keeps life interesting!!

The mail brought a wonderful exchange package from the group of us doing the Easter exchange. It came from Cathy and totally made my day yesterday!! Here is a snap of everything... 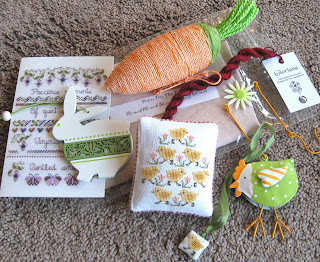 Cathy stitched a super "chickie" mattress pin cushion and "chickie" fob - aren't they totally sweet!!! The package included some super treats - a beautiful piece of "Earthen" linen from PTP, a skein of Gloriana silk, a carrot of chocolates and two really cute Easter decorations - a super thoughtful parcel for Easter. Here is a close up the stitched lovelies... 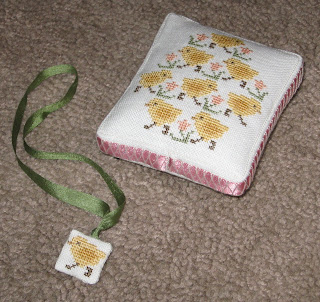 The pin cushion is stitched on 40 ct Antique white using DMC floss. the chart is PS #107 "Just Hatched." The finish piece is surrounded by a lovely pink ribbon - this couldn't be cuter!!!
Thank you so much Cathy!!! 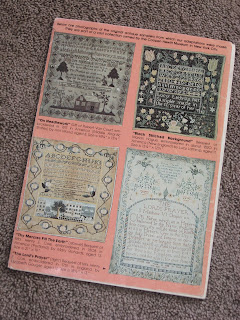 These are really nice samplers and yet the person who charted DMC conversion must have been colorblind - as they are all very brightly charted - I know, I know, that originally they would have been bright and maybe that was what they were going for - but you know me and my mantra "Grey, Beige, Brown and Black" - extra dingy!! I am certain I can rechart the colours for a more beat up and aged look!! :)

The flickers last night were a double feature of Carmen Miranda - that Brazilian Bombshell!! The first film was "Something for the Boys" - 1944 - starring a bunch of character actors from 20th Century - Carmen Miranda, Phil Silvers, Vivian Blaine and Michael O'Shea. This was one of the handful of films that Carmen did and as in all her pictures she was once again a singing and dancing dynamo - who tore through the English language with a machete for laughs. The second film was "If I;m Lucky" - 1946 - starring the same group of actors but this time without the technicolor. It was another light film with musical numbers but the major difference was it was without the benefit of color and a Black and White Carmen was very different. After the war 20th Century didn't know what to do with her and they did less and less and nothing in color and Carmen needs the color to pop - I enjoy these films for the 40's and would recommend them to anyone for just an entertaining romp and some great musical numbers by both Carmen and Vivian. Both films feature a very young Perry Como and his voice in both is deep and silk another reason to see them. Corinna mentioned a film from the other evening on TCM "Stage Door" 1937 - a film I love and was also watching!!

Here is a compilation of Carmen film clips - both color and B&W - with a hip shaking recording of her singing "Chica Chica Boom Chic" - I dare you to try and sit still!!

I think that's about it for today sports fans. Thank you again fro your support and comments - have a great weekend and do stop by again!!!