GR&&DF this is the last post for a week or so as I will be leaving on my Christmas travels at the crack of jack in the morning - with a 4:10am Super Shuttle pick up it will be a longish day. I did want to leave everyone a little card....

".... I have always thought of Christmastime when it has come around, apart from the veneration due its scared name and origin, if anything belonging to it can be apart from that; as a good time, a kind, forgiving, charitable, pleasant time, the only time I know of in the long calendar of the year when men and women seem by one consent to open their shut up hearts freely and to think of people below them as if they really where fellow passengers to the grave and not another race of creatures bound on other journeys.... And therefore uncle, though it has never put a scrap of gold or silver in my pocket, I believe that it has done me good and will do me good and I say: God Bless It!...
- Fred, Scrooge's nephew
I also wanted to post a progress snap of Alphablocks.... 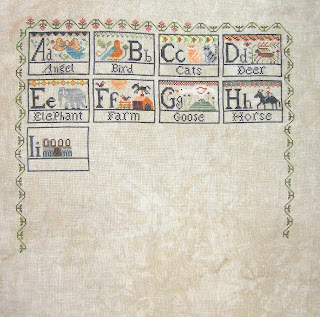 Last night I got a bit of Christmas cheer watching the annual production by the Mormon Tabernacle Choir on the tube. This year it was called "Ring Christmas Bells" with guest soloist Brian Stokes Mitchell and guest performer Edward K Hermann. What a treat, as it always is!!! If you get the chance to see it you will not be disappointed!!

After the concert was over I popped in a DVD - "The Sea Hawk" -1940 - starring Errol Flynn, Brenda Marshall, Claude Rains, Flora Robson, Allen Hale and Donald Crisp. What a super swashbuckler type movie. Beautifully shot in B&W and wonderfully directed by Michael Curtiz.

I wanted to also answer some of the super comments from yesterday... Sharlotte mentioned "The Ghost and Mrs. Muir" - 1947 - starring Gene Tierney, Rex Harrison and George Sanders - I love this flick and would highly recommend it to anyone!! Gene is at her pinnacle of loveliness - between this flick and "Laura" - 1944 you got two super Tierney flickers!!! Lorraine mentioned another flick - "The Parrots of Telegraph Hill" - 2003 - what a great little film. We live on a promontory called Red Rock on many older maps of SF and the cliffs around us are heavily laden with scrubby trees - these trees often have these city parrots roosting in them. We see lots of birds up where we sit overlooking the city and a colorful parrot or hummingbird really adds to our city wildlife. Wrapping up with a comment from Karen about "The Bunny House" - she mentioned a quote about a single mahi - a totally funny line - another really funny moment was also in the restaurant with a little table and a piece of gum!! I was LOL at that!!

There you go sports fans!! I'll be back in a week or so - have a great Christmas and Holiday season!!!!