GR&DF thank you for your very kind comments on yesterdays post - they are a really good morning hug here in chilly old San Francisco. It has been in the 40's and 50's from dawn to dusk the last few days. We are expecting a big winter storm to push in off the Pacific on Sunday.... this is our wintry wet season and the storms off the northern Pacific can be cold, wet and windy.

Yesterday I went on my weekly visit to the Farmers Market (no good snaps of the market today) and I picked up the usual things, cukes, tomatoes, potatoes, winter fruit... and some nice big walnuts. Being from the South I grew up being able to get lots of pecans, and do miss not being able to get them fresh from the grove, but out here in the west you get beautiful walnuts. The getting of the nuts put me in the mood the start on some Christmas treat making, but of course I needed to shell the suckers first!! 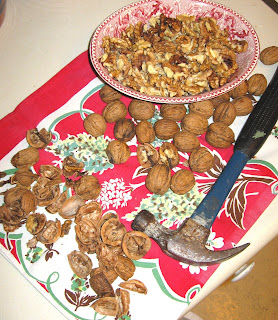 Here is a snap of my high tech operation... I find that one good wack on the point usually yields a good half nut or larger piece of nut than a wack on the side. For my pecans I just get a bag of them already shelled from Trader Joe's - ain't that living high on the hog!! A preshelled nut! I have a few new recipes I am going to try and it looks like a treat making weekend - the Holidays have really begun at our house.

We ran to the Safeway in Diamond Heights yesterday evening - I needed a few things for the treat extravaganza and I hate the grocery store on Friday, Saturday or Sunday - just way too many people crowded into a store for my taste. Going through the produce section they had Cherries - yes - you read that correctly - a delicious Summer fruit - so of course I had to buy a small bag - at $6 a pound it certainly wasn't going to be a big bag!! 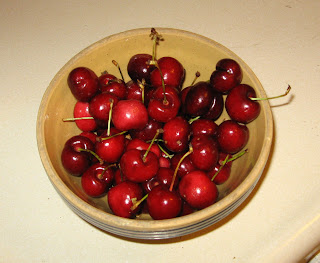 They are from Chile and very nice looking, but on the sour side. I think it is crazy that you can get fresh cherries in the winter - and I am such a sucker to buy them out of season. It is one of the main reasons I love going to the farmers market as it is local, fresh and IN season. Oh, well sometimes you just gotta buy the odd and weird!!

I haven't talked about any flickers lately.....so.... last night was a pretty good night for a couple of them. The first up is "The Great American Broadcast" - 1941 - starring Alice Faye, John Payne, Jack Oakie and Cesar Romero. This nice little musical is set at the beginning of Radio just after WWI - and the love triangle or I should say love square was a nice touch but predictable. I just love watching Alice Faye and really enjoyed this flicker. You may know that she got her start in early Radio so she was perfectly cast in the roll of Vicki Adams - early Radio starlet!! The second flick was "Steal a Pencil for Me" - 2007 - This documentary was story of two Holocaust survivors - Jaap Polak and Ina Soep - They met just before the Netherlands was invaded but the Nazis on May 10th 1940 - she a single girl and he a married man - I like what a reviewer had to say..... "Man, Wife, Girlfriend, Holocaust." That sort of sums it up. It is a a film of interviews of Jack (Jaap) and who became his second wife, Ina. The story they have to tell is important and told very well through this film. Two more very good films - check them out.

Still working on the black box for the letter "C" and still not a snap in site - whoops!!

Thanks for stopping by and do come again!!!

Gentle Friends, I've been seeing this piece pop up lately on Social Media and remembered how much I enjoyed stitching it... here's a...