Gentle Friends last weekend was almost a bust for cool stuff to find and buy, but I did wind up with a few treats.... 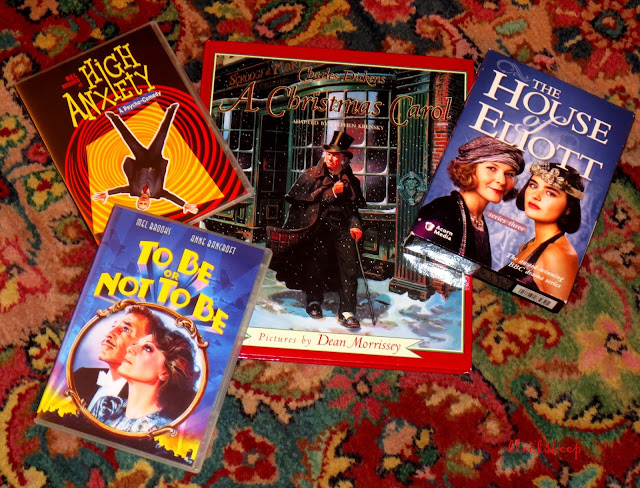 ... two DVD's from the Mel Brooks Collection released in 2006 - there are actually 8 DVD's in the set, but I already 5 of them in DVD format, only lacking 3, these two "High Anxiety" - 1977, a tribute to Alfred Hitchcock and "To be or Not to Be" - 1983, a remake of the Ernst Lubitsch 1942 classic.  There is one other film from the set "The Twelve Chairs" - 1970 - but I couldn't find that in the DVD bin, the other films where there, however the Box that they all came in was missing which made these available individually.  I also picked up a pristine set of the 3rd Series of "House of Elliott" - 1994 - and although there was really no ending and without a wrap of the story (the plug was pulled on the series at end of this the 3rd installment) I still enjoyed the Series  - BTW it was created by that dynamic duo Jean Marsh and Eileen Atkins who created that other super series "Upstairs Downstairs."  I also picked up another beautiful picture book version of "A Christmas Carol."

That's about it for today sports fans - thanks again for stopping by, do stop again!!