Gentle Friends I hope you all had a great weekend - it was really nice here by the Bay.  The fog rolled in over the city each night and it got so chilly I even had to kick on the heater as my sweat pants and sweat shirt just were not doing the job.  I love the cold breezy weather we have here in the Summer.  We made it to quite a few Thrift/Consignment Shops but they were a bust, that happens sometime.  We did make it to a single Estate Sale - a whopper - I'll talk about that on Thrifting Thursday.

I think I will make Mondays a Movie day.... and with that in mind lets talk about a not so very secret film genre I really enjoy - WWII Films, well, I enjoy most war films but WWII films are tops in my book.

Recently I got to see 3 top notch WWII films - interesting stories all based in fact - with a bit of fiction thrown in to keep things going.... in Film release order... 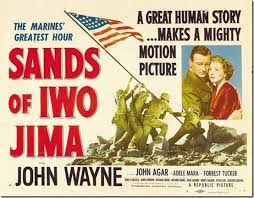 ..... first up will be "Sands of Iwo Jima"  - 1949 -  starring John Wayne, John Agar, Forest Tucker and Adele Mara.  The film follows a group of Marine recruits from training through the invasion of Tarawa and eventually the landing and battle on Iwo Jima.  The film ends with the men witnessing the raising of the American flag on Mount Suribachi, and iconic moment during the War.
_________________________ 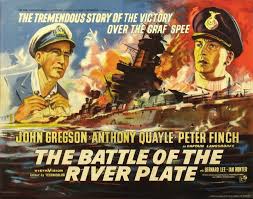 ......the second film "The Battle of the River Plate" - 1956 - starring John Gregson, Anthony Quayle and Peter Finch.  This film was Written and Produced by that great English team of filmmakers Michael Powell and Emeric Pressberger.  The story focus on the German pocket battleship Admiral Graf Spee.  The film is beautifully told and shot (as are all their films).
__________________________

... and the third film is "Sink the Bismark" - 1960 - starring Kenneth Moore, Carl Mohner and the lovely Dana Wynter.  The film follows the launching of the Bismark, the largest and most powerful battle ship afloat. Built in 1939 it was bound for the North Atlantic and the destruction of British Convoys to England.  Nothing could stand up to the Bismark, during the battle of the Denmark Straight  the Bismark sunk the Battle cruiser HMS Hood, the pride of the Royal Navy, it also seriously damaged HMS Prince of Wales.  With the destruction of the Hood, the Royal Navy focused all of its attention of the destruction of Bismark involving dozens of warships.  The Bismark was on its way for repairs to an occupied French port when the steering gear was rendered inoperable by an attack from Swordfish Biplanes that came from the aircraft carrier HMS Ark Royal.  This bit of luck led to the eventual destruction of the Bismark.

That's about it for today sports fans,  Thanks for stopping by, do stop again!!