Stash, Stitchin and a few Flicks

GR&DF the title sort of tells it all - in a nutshell!! It is still raining here and will continue on and off for the next week or so. I so love the rain and rainy days and nights. I think today will actually be a more dryish day and then the storms start to pour in from the Pacific again. In the afternoon and evenings when the hounds go out for their "communing with nature" time - I don't think they really care for the cold wet grass and pavement and I think that if they could they would prop up on a single foot to keep the other three dry. 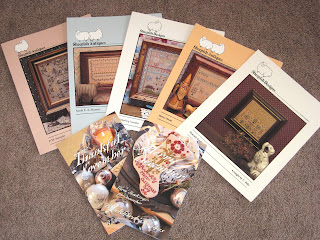 They arrived yesterday along with the November and December BBD Stocking charts. I really like the SD samplers as they are not too big and usually have some really great specialty stitches to keep things interesting. Now that I have all 12 of the stocking chart books I should probably get to stitching some of them up!! I also received in a trade..... 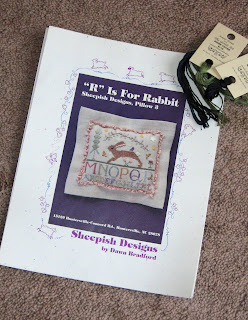 The final piece of the SD "pillow" charts - "R" is for Rabbit. I was so happy to get this part and now have to work things around in my brain as to how I am going to get them all to go together.... with an odd number of charts should I try my hand at creating a sixth one to make things even....?

I worked some on Alphablocks.... here is a snaperoo - 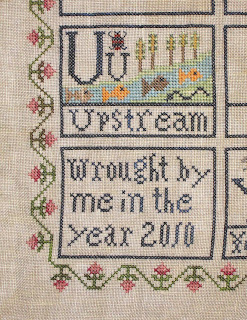 this is the lower left hand corner.... still liking this one and moving right along.

The block of films today starts off with a fun film - "That Touch of Mink" - 1962 - starring that perpetual "girl next door" Doris Day, Cary Grant, Gig Young and Audrey Meadows. I really enjoy the DD films and can watch them over and over again!! Once again Doris plays a beautiful girl - but she is an out of work computer operator who wants nothing but to get married. Cary Grant plays a business man that goes from affair to affair without any intention of marriage until he "splashes" the Day. Great movie with a few giggles and a happy ending. TCM on Sunday showed a couple of great films starring John Lund. Today he is not as well remembered as some but he was a very credible actor of his time. One of his more memorable films is "Foreign Affair" - 1948 - starring Jean Arthur, Marlene Deitrich and of course John Lund. This film is set in post WWII Berlin with Lund playing an Army Captain dating ex-Nazi Cafe singer Deitrich. When in flys Congress Woman Arthur - so begins the triangle of love. A great film directed by Billy Wilder. Sunday afternoon TCM showed an old favorite of mine "Breakfast at Tiffany's" - 1961 - starring Audrey Hepburn, George Peppard and Patricia Neal. A great flick every time! Last night the flickers where - "Sweet Bird of Youth" - 1962 - starring Geraldine Page and Paul Newman. The film was taken from Tennessee Williams play and just crackles with the superior acting with most of the original Broadway cast. The last movie for the evening was "The Diary of Anne Frank" - 1959 - starring Millie Perkins, Jospeh Schildkraut and Shelly Winters. Winters won her first of her two Oscars for the role of Petronella van Daan. A really great movie interpretation of the story of the Frank family in hiding.

There you go sports fans.
Thank you for the kind comments and for stopping by!!
Do come again!