Q Block, Comments and Learing a Thing or Three!

GR&DF again I must thank you for your kind words!! Warm thoughts on this - a cold and blustery Wednesday morning. We are drying out a bit with no rain for the next few days, but another storm is gearing up for next week. That means we might actually be able to get to an Estate sale or Consignment Shop this weekend!!

Last night I finally got to work on the Q block of Alphablocks. If you have noticed I have worked all around an avoided this block - for no other reason than I was pondering a complete re-charting. Of all the blocks this is the one block that I have never cared for. IMHO it just did not fit with the rest of the images, so I have been turning over ideas as to just what I could replace it with. Finally I settled on an idea and here is a snap of the block as it stands today.... 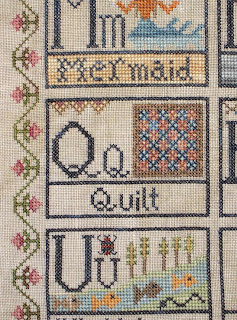 The chart I made is a sort of 9 Patch quilt banded in brown - I like this much better than Queen - and think that with the blocks - N for Needle and X for X-Stitch it is a better fit - I may put something in that white space next to the quilt but will leave it alone for now.

I wanted to talk about a few of the comments from yesterday....

Ariadne asked about my flicker watching - yes, I do watch films and stitch in the evenings - it is my decompression and down time. How I sitich is another matter.... imagine two of the the three hounds on me - usually Pete is laying across my shoulders and either the Peach or Lolly is snuggled down on my left side - that is me and my very poor stitching posture. The movie channel I watch the most would be TCM - this is a super station and they show films 24/7. We have HBO and other pay channels but I seem to settle on TCM more than any other movie channel. I also have a Netflix account - what works for me is the 3 disc rotation. It is usually a day turn around for a disc and by keeping my queue full I always have something either coming or going.

Judy mentioned Terri and her Alphblocks piece - it is Terri's finihsed piece that is the cover photo on the chart - this lovely piece was one of the reasons I wanted to stitch this sampler. The blog universe is a great place to see others works and find new inspiration for stitching.

Melissa asked about the Sheepish Designs charts - I got them from Em-Li's. She still has quite a selection and I figured that with the charts disappearing so fast and going OOP I better just bite the bullet and get what I want now instead of paying the big bucks on the secondary market. Melissa is also having a great give away for her 100th Posting so click on over and comment before the 31st.

Sherry asked about acquiring my copy of CHS Alphblocks - as with most of my charts as I finish them I usually pass them on to other stitchers - and this is no exception. I would love to pass this one on to you except I have promised it to another stitcher as part of a trade. If it falls through I will certainly let you know.

Talking about trades and tradiing - I am thinking about other charts in my stash heap and have already started to cull this pile of things I have done or may never do. I am hoping to get them together so I can make some other trades. Keep watching as I will probably happen sooner than later.

Last night it was an evening of interesting history. There were 3 Netflix Discs awaiting perusal - starting off with "Echos from the White House" - 2001 - This was not some dry history of the house itself - although I would have enjoyed that also!! - but the written word of those that had lived in the house and their impressions. All the letters, diary's and words were spoken by famous actor types. Pieces where read or spoken from the earliest words about the house by George Washington to the present day. I really enjoyed this presentation and had never seen it before. Second up was a National Geographic TV piece - "The Last Voyage of the Lusitania" - 1994 - I had seen this special before and it was nice to see it again. Such a tragic event that instigated the US into WWI. The last but certainly not the least was another National Geographic TV special - "Inside the Vatican" - 2001 - I had never seen this special but I have visited Rome and spent quite a bit of time inside Vatican city - so it was nice to see places I had been and some places that regular tourist types never get a chance to see. All three of these specials where made for TV and are pretty shortish - except the Vatican which was about 90 mins.

There you go sports fans. Thank you again for making my little Blog a part of your day - do come again!!