Super Mail and some Flicks

GR&DF I do thank you for such nice comments yesterday about my little bit of re-charting. I had quite a few emails about the Q square and my other changes - I will try to post them all when I finish the sampler - but I am so bad about making notes if you don't see and explanation about anything feel free to ask.

Yesterday the mail brought me some wonderful things from two very dear friends I have made here because of blogging.

From the Holiday Exchange Blog I received my Valentine Exchange from my partner Becky. She once again spoiled me with her package - as she is wont to do....... The beautiful box arrived... 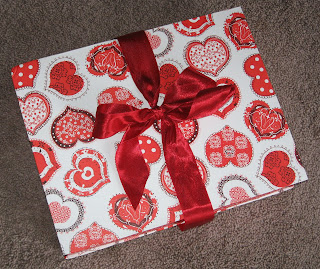 and after taking the brown paper from the mail off was this beauty!! Opening up the box I found that Becky had filled it with such goodies..... candy, ribbon buttons, Valentine decorations..... my goodness ....my poor spinning head!! 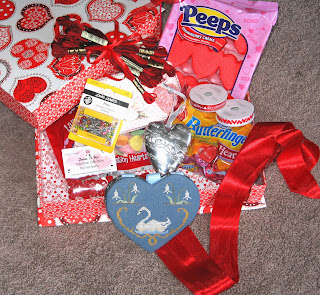 with the star piece being a gorgeous needlbook..... 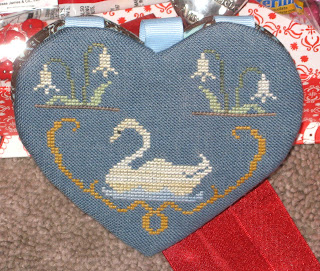 beautifully stitched and finished!!! This opens to reveal... 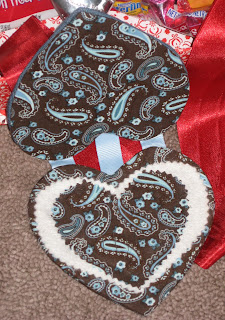 lovely brown and blue paisley pieces for needles - and there are even some needles already there! I am just in love with this needlebook. Not only because it is beautiful and came from sweet Becky but because it gives me hope. The hope you ask about.... I have avoided the needlebook finish because of my non-sewing skills - but the construction of this needlebook I might actually be able to accomplish - It is beautiful, functional and inspirational!! How often can you say that. Thank you so much dear friend for the wonderful exchange!!!

The mail also brought a sweet gift from another dear friend - Donna - a friend I made a couple of years ago when she organized the LHN RR that I participated in. 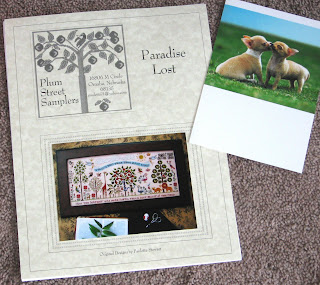 Donna had sent me an email a few weeks back telling me she wanted to get me a chart that I wanted and what would I like to have. Well, I thought about it for a moment or so and then almost immediately said "Paradise Lost" by Plum Street Samplers - and so slam bang it arrived yesterday. This was such a very generous and kind gesture - Thank you so much dear sweet Donna!!! I now need to think about stitching it up and wondering if it can take a Belle Soie Conversion..... I wonder????


Sherry asked what was up on the stitching agenda after AlphaBlocks - nxt up is "Memorial Sampler" from Midsummer Night Designs.

Picture from the chart pack - I will need to chart out my family names. I had wanted to do this last year and got all the floss but just never got a good piece of linen I liked. I also ran out stitching time - Now I have a great piece of linen and it is next up so it will get done over the next few months.

The flicks for today start off with a hum dinger - "To Each His Own" - 1946 - starring Olivia de Havilland, John Lund and Mary Anderson. This film is one I had not seen before and really enjoyed. Set around 1917 the story is told in flashback and evolves around a small town girl in "trouble." This trouble is adopted by another woman after the loss of her baby. The story wraps up with a teary revealing scene in London during WWII. Certainly a woman's film from the period - Olivia de Havilland was very good. For a real tour de force picture of Olivia's watch "The Heiress" - 1949 a great film with a great actress!! Next up - "It Should Happen to You" - 1954 - starring Judy Holliday, Peter Lawford and in his first starring role on film Jack Lemmon. A delightfully breezy comedy of a girl that wants to make a name for herself - and does she ever - in a big way!! Then ensues all the hilarity and of course and love triangle. The direction is by that super director George Cukor. The next flicker is "Bell, Book and Candle" -1958- starring Kim Novak, James Stewart, Jack Lemmon, Elsa Lanchester and Hermione Gingold. Another great comedy with a magic touch of the mortals and the supernatural. The last film today was last nights flicker - "Pennies from Heaven" - 1981 - starring Steve Martin, Bernadette Peters and Christopher Walken. A superb but dark musical of the depression. I have alwys enjoyed this filom and over the years has gotten a big cult following.

It's getting late so I will sign off dear ones!!
Thank you again for your visit and your kind comments do come again!