Some Fun Mail and a Flicker

GR&DF thank you for you kind words about my little blog - and my not boring you all into a daily coma!! I do enjoy posting daily during the week and often wonder about my blathering on about things I like or things going on in my life. I would guess that many times the Blog reading public would rather I didn't drone on about some topics, but that's me a soap box standing - droning crazy person!! Don't you think we are all just a bit off any way - and crazy comes in degrees... from completely unhinged to just slightly off the nut! I would hope I am on the nut end!

Yesterday brought some super mail. This mail would never had occurred if I hadn't been on the frantic search for those Sheepish Designs - "Alpha" charts. The search opened a Pandora's box of goodies that Ms Bradford published and that are now very scarce in the open market. In my searching on line and calling about a bazillion different Needlework stores searching for the "Alpha's" I came across another set of 5 charts - that make up 5 different ABC Pillows - I found 4 of the 5 charts in one place - 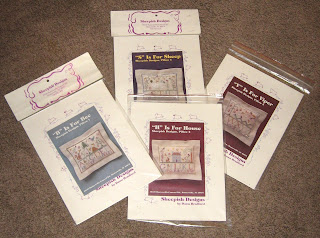 I first saw a single piece finished in an album somewhere on line and knew that there was more - as it was the V for Viper piece. I wrote it on my list of OOP things to find not thinking I wouldn't have an ice cubes chance in Hades of finding any of them. Then slam bang a call to a shop asking about the "Alpha's" led me to finding 4 of the 5 charts - and I snapped them up. Now I am only missing the R is for Rabbit chart to complete the set. I couldn't believe my luck. I would say to anyone that likes Sheepish Designs - If you see a chart you like for sale buy it - do not wait - they are getting harder and harder to find - especially the multiple chart pieces.

Last night I saw a very entertaining film - "A Harlots Progress" - 2006 - starring - Toby Jones, Zoe Tapper and Sophie Thompson. I really enjoyed this film - the story is imagined and tries to explain the creation of the series of 6 paintings (now lost) that William Hogarth made his name with in the 1730's. The series was turned into a set of etchings and from them we know of the paintings. "The Harlots Progress" tells the all to common story of a young country girl come to London to fond her fortune. The six pieces illustrate her rise and fall and eventual death from the seedy life of a Prostitute. The film is really well done and brings to life the early 18th century in London. It is an adult film made for TV. The sets and costumes are top notch along with the very interesting cinematography - all very well done. With the occasional sub title thrown in to explain something or for shock value - the film brings to life the common dirty underbelly of the city where the very wealthy and very poor mix for pleasure.

There you go sports fans - Thank you once again for stopping by and for your kind words!!