Some Weekend stuff - with Snaps!!

Gentle Readers and Dear Friends  - we are to be getting some rain today from a swirling storm coming in from Alaska. We aren't supposed to be getting rain this time of year!!  What's up with that??  I do love the rain - and I enjoy listening to it falling and splashing.  Our rainy season here is the winter - the most weather we should be getting now is fog - we got lots of fog yesterday afternoon - it rolled in over the city like a grey misty blanket.  Oh, well, one day of rain and it will blow out and we'll be back to our usual cold fog, yea!!
__________
It was Pride Weekend here in the city - and although many thousands of people flock here to watch the parade and then walk around the Civic Center Festivities - that was never on our agenda.  I haven't been to the Parade in years and have avoided the crowds in the CC area for just as long.  You can click HERE to read all about the events.
__________
Instead we had a birthday party to go to  in the east Bay -Rico's cousins son turned 8 and so we went to his festivities instead.  The theme of the party was SpongeBob Square Pants - and who doesn't love SpongeBob??

There was cake - and it was filled with fresh strawberries.....

Here is poor SpongeBob pinata after the whacking..... 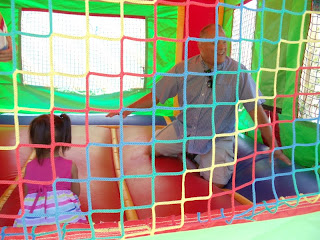 filled with a Rico......  It was lots of fun and the weather couldn't have been more perfect.  We had a great Barbecue lunch and saw some other family members we hardly ever see.  So, kudos to Kurt and Nicole for the wonderful time they showed everyone and Happy Birthday Jaden!!!!
__________
I often forget that not everyone knows what I am talking about all the time.  Like last Friday when mentioned that I love me some purple Gatorade.  I didn't think that not everyone would know what it is.  So, here is a snap of the stuff...

I will also like the blue, but only the purple and blue, and not the yellow, green, orange or the red.  Gatorade was invented at the university of Florida as a sports drink - the mascot of the school is the Gators - hence the name Gatorade.