I was a WINNER!! and a Bunch of Paramount Firsts

Gentle Readers and Dear Friends.... the comments for yesterdays post where wonderful, as always.  Brightening up my morning.  Thank you all so very much!!!!!
__________
Our Little Blog Community has many Drawings and Gift-a-ways - all for different reasons.  Usually it is boils down to basically sharing and giving.  I threw my name in on such a Drawing a few weeks back.  It was a Super-d duper 3rd Blogoversary Drawing that Amy over at "Cross Stitch and Cupcakes" was hosting.  She was actually having 5 Drawings to celebrate!!  I was the lucky winner of "Giveaway #2" - and what a super giveaway!!  It was a wonderful haul of various cuts and pieces of lovely linen.  Here's a snap...  I had some help....

I couldn't believe the selections - they are just beautiful!!  Thank you so much Amy!!
__________
Click HERE if you would like to get in on my 4th Blogoversary Drawing.  Only a few more days to enter.  I am busily stitching away on the prize - so it will be a surprise package.
__________
Over the weekend I saw a really interesting and well constructed film.  It was an oldie (no surprise there) called "The Trail of the Lonesome Pine" - 1936 - starring Sylvia Sidney, Henry Fonda, Fred MacMurray, Fred Stone, Beulah Bondi and George "Spanky" McFarland.  This was Paramount's First Technicolor Feature, First film to be shot in three strip Technicolor AND their First colour feature to be shot outside of the studio on location. 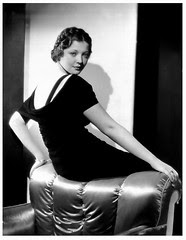 Sylvia Sidney - 1910-1999
It's a wonderful movie - a pretty good story about feuding families - well written & well acted by a better than ordinary cast. "Spanky" MacFarland (of the Our Gang shorts)  was a jewel in his role as Buddy.  Fred MacMurry and Henry Fonda performed well as Sylvia Sidney's love interests. Beulah Bondi was her usual wonderful self - She carried more than her share of the movie.  Although the story is set in the Blue Ridge Mountains the movie was actually shot near Cedar Lake, in California's San Bernardino Mountains. Well worth a look - It  was a Netflix selection and the DVD transfer is top notch.  If you've not seen it make the effort to give it a chance.
__________
There you go sports fans.  Thanks again for stopping by, and for the kind comments... do stop by again!!
Take care,
edgar
Posted by Edgar at 7:09 AM