A Couple of Flickers

Gentle Readers and Dear Friends your comments where just super  for yesterday post and I do thank you for them and all the time you spent leaving them.  I am sorry to make mouths water and tummies grumble but I couldn't leave out the food snaps.  I love looking at other folks food snaps to see what is going on in the culinary world - just like I so enjoy seeing all the stitching progress and finishes.
__________
Over the weekend I inflicted a few flickeroos on the Baby Sister and so today I will mention a couple.
First up will be "The Children of Huang Shi" - 2008 - starring - Jonathan Rhys Meyers, Radha Mitchel, Yun-Fat Chow and Michelle Yeoh.  In a nutshell the story revolves around a British journalist who with the help of an Australian nurse helps to save a group of orphaned children during the Japanese occupation of China in 1938.  A beautifully shot film with some really tough scenes to watch.

We really enjoyed this film .
It reminded me of the Ingrid Bergman film "The Inn of the Sixth Happiness" - 1958.
__________
The second film was part of my ongoing Shirley Temple-fest.  What came was a later film called "The Blue Bird" - 1940 - a technicolor fantasy film that is closely related to the Wizard of Oz in theme - there's no place like home or the happiness you chase you can find right in your own back yard.  With a stellar cast that included Spring Byington, Nigel Bruce, Gale Sondergaard, Jessie Ralph and Laura Hope Crews.  The story revolves around two children who are looking for the Bluebird of Happiness and are led through the past , present a future looking for it.  Shirley is a bit on the bratty spoiled side - a break from her earlier films - but even at 12 years old she carries the film.  An interesting piece of film released at the beginning of WWII - if you like Shirley and haven't seen the film I would encourage you to get a copy and watch it. 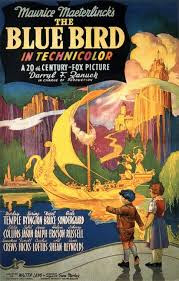 There you go sports fans - thanks for stopping by do come again!!
Take care,
edgar
Posted by Edgar at 7:08 AM