Some Stash, Some Corn and Some Flicks

GR&DF I was happy that yesterdays film post was well received and that you enjoyed reading my little babbling about two very good actors and some of their films.

Yesterday was a first rate mail day - could you hear the squeal???? Like a pig in the mud - that's how happy I was to get two packages of stash. Was it stuff I could have lived without - of course it was, but I had some extra funds (got to love those refund cheques!!) so I felt I needed to stimulate the economy a bit. Here is a snap.... 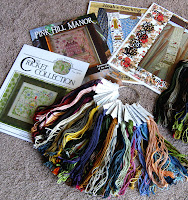 .. and I can justify or is that rationalize, each purchase. I had to get the 4th chart from BBD - Pink Hill Manor - this is from the Anniversaries of the Heart series. The way the BBD stuff seems to go OOP so quickly it is better to get the charts when they come out than on the secondary market - or at least I can talk my self into that!! I have wanted to get these two stocking charts from CHS for a looong time - not to make stockings but to make long pieces like bell pulls - and I am thinking that the CHS charts will soon start to get hard to find and be OOP. Better now than later. The last chart was a new release from the Cricket Collection - not my usual type of thing, but for some reason the Qukeresque of this piece really struck a note with me. I have also decided to acquire a full complement of Belle Soie - I found that when I was converting a chart from DMC/NPI to BS I really hadn't enough colour changes so I made up my mind to get them all - it will take a while but I am determined. This my BS ring with my newest additions - the little bit showing to the right are my extra skeins of BS.

Last night on the way home we ran into a small Wednesday afternoon Farmers Market in the Castro. We stopped and picked up some fresh corn....

It was pretty tasty but not as good as the corn will be later in the season. I really like Reed and her movies are a true joy to see - she was always entertaining and quite beautiful - last night they showed two of my favorite Donna Reed films. Not only because Reed was in them but because they are truly good films. First up was "From Here to Eternity" - 1953 - starring Burt Lancaster, Montgomery Clift, Deborah Kerr, Donna Reed and Frank Sinatra. This top film won 8 Academy Awards with two Oscars going to the performances of Reed and Sinatra (this is a much better performance by Sinatra than yesterdays film) I like just about everything about this film especially how Reed and Kerr play totally against character. I have talked about this film many times before and will probably talk about it again - I would totally encourage you to see this film if you have not had the pleasure. The second Reed film was "They Were Expendable" - 1945 - starring Robert Montgomery, John Wayne and Donna Reed. This really good WWII film is about the PT Boats and the defense of the Philippines at the beginning of the war - the well developed characters and good story make this one of the best of the late war films to come out of Hollywood. The third film of the evening was a Netfilx DVD - again a WWII film - "Attack" - 1956 - starring Jack Palance, Eddie Albert and Lee Marvin - set in Belgium towards the end of teh war. I really like this review about the film - "Albert is the ineffective commander, Palance the subordinate that swears revenge. This one is not for the squeamish, the scene where Palance is ran over by a tank is shocking. More shocking is the wonderfully psychotic performance by Albert, as the mentally disturbed commander. Lee Marvin has a nice supporting role, this one will make your skin crawl." That about sums up this film from a play. All three of the films are very good and I can certainly recommend them as top notch WWII flickers.

There you go sports fans. Thanks for stopping by!!