Silky mail and some flickers

Yesterday some silk came from Drema - Needlecraft Corner - she was having a sale on Gloriana Silk and I am a sucker for silk so how could I refuse... 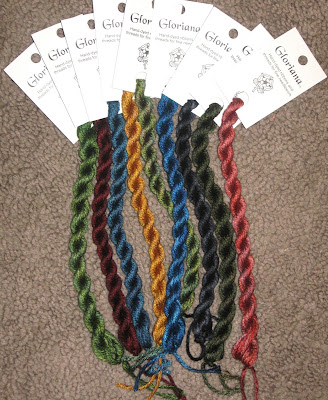 Other stitchy snaps are basically none existent as all the stitching for the past few days has been on exchanges and things I can not show yet.
This weekend I will stitch on something I can have a snap for Monday.

I have been seeing some really super movies lately and I wanted to tell about. The first and foremost would have to be "Mrs. Palfrey and the Claremont" - 2005 - starring Joan Plowright, Rupert Friend and Anna Massey. What a super movie!! I defy anyone who watches this movie not to be moved! I just loved this film and would highly recommend it!! The next two films were a Bing Crosby double feature - starting off with "The Emperor Waltz" - 1948 - his costar was Joan Fontaine - the other film was " A Connecticut Yankee in King Arthur's Court" - 1949 - co-star here Rhonda Fleming. Both films are sort of musicals with some super songs, lavish productions and lovely leading ladies - nice easy flicks to watch. If you like cute stories nice music and pretty films then these are a pair for you (I really enjoyed them!! and hadn't seen them for a really long time). The last flick is one I always enjoy and have seen many times - "The Age of Innocence" - 1993 - a Martin Scorsese film starring Daniel Day-Lewis, Winona Ryder and Michelle Pfeiffer - the story is from the book by Edith Wharton - a writer whose works I just love - and the film is a very good adaptation - both lush and intimate with wonderful acting, sets and costumes. It is a period drama set in the NY of the early 1870's and worth seeing if you haven't.

Thanks for stopping by!! Have a great weekend!!