A Birthday Brawl, an exchange and some more Jardin....

This weekend we had our annual Birthday Brawl - that's what I call Rico's party - since his birthday is right between Christmas and New Years we always wait to have something at the end of January - and this year was no exception with about 60 or so people and it lasting until way after midnight - it was a real success!!! I was up until about 2 cleaning up and in the morning after gathering up the Birthday offerings - here is a very telling snap - 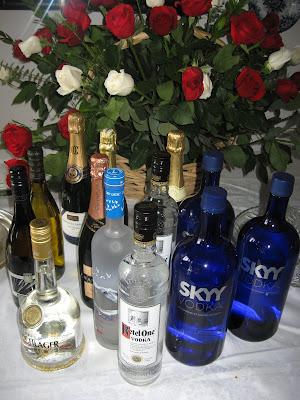 These were some of the things our friends brought to Rico for his birthday - they know us very well!!!! .......and there is a ton of cake left over!!!!

I heard form Heather that the Valentine exchange I stitched for her had arrived
- here is a snap of that exchange. 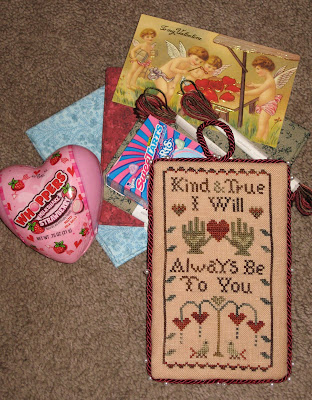 The pattern came from Goode Huswife and is called "A Valentine Sampler." I have always wanted to stitch this up but never had the opportunity. I am so glad that Heather likes it as it was not the first thing I was going to stitch up - but I think it was the better choice for this exchange!! I am still waiting to hear about my Winter House Exchange as it seems to be taking a really long time to get where it needs to be.......
Even with the party I got some stitching in -
here is shot of the weekend progress on the Le Jardin - 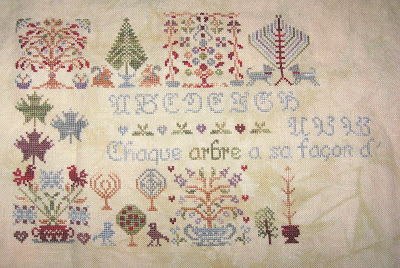 I did see two movies that brought back some memories - the first was "Coneheads" - 1993 - a movie based on a skit from the original SNL - starring Jane Curtain and Dan Aykroyd - I had forgotten this flick and really enjoyed seeing it again. The second film was also an oldie from when I was in High School - "Trading Places" - 1983 also starring Dan Aykroyd and Eddie Murphy - a really funny Christmas movie with costars from yesteryear - Don Ameche and Ralph Bellamy. Speaking of Ralph Bellamy - I saw a film yesterday called "Below the Sea" -1933 with him as the lead male star... his co-star was Fay Wray of King Kong fame. Usually he was the second male lead and never got the girl!! All three of these movies were really fun and worth seeing!!

Thanks for stopping by!!
Take care,
edgar
Posted by Edgar at 7:26 AM