....since we had a super long weekend - 4 days!! - the work has piled up. I did want to check in a say how wonderful it is to get back to blogging - I was totally having some sort of withdrawal!!!

Over the Holiday I worked on two pieces. One piece was for a MAW that had gone missing - from my sieve like brain - I thought I had finished and sent it off - I had wondered why I had not heard that it had arrived - but just thought it was a slow because of the Christmas mails..... I finally had some sort of wake up moment while going over the past years stitching that the reason it hadn't gotten there was I had not even finished the stitching but had only just a small start. Geeeze what a ding I am...... Now it is going out a few days late - which makes me crazy - but better late than never - I will show a snap when it arrives in it's new home.

The other piece I worked on was Donna's Halloween RR. Her piece is a Halloween House - and here is a snap - 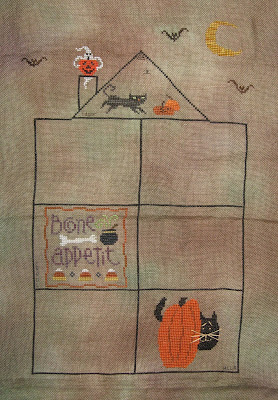 I did the attic part - and what an odd space - but I think a spooky kitty looks good. Donna had asked that whomever did the attic do a moon so there is a moon and I threw in the bats. The floss' I used were Belle Soie (surprise) and WDW. This is the softest cloth to stitch on and was a total dream - It is ready for the mail tomorrow.

That's about it for today -
Thanks for stopping by and here's to another great year in our little cyber Blog world!!!!!!